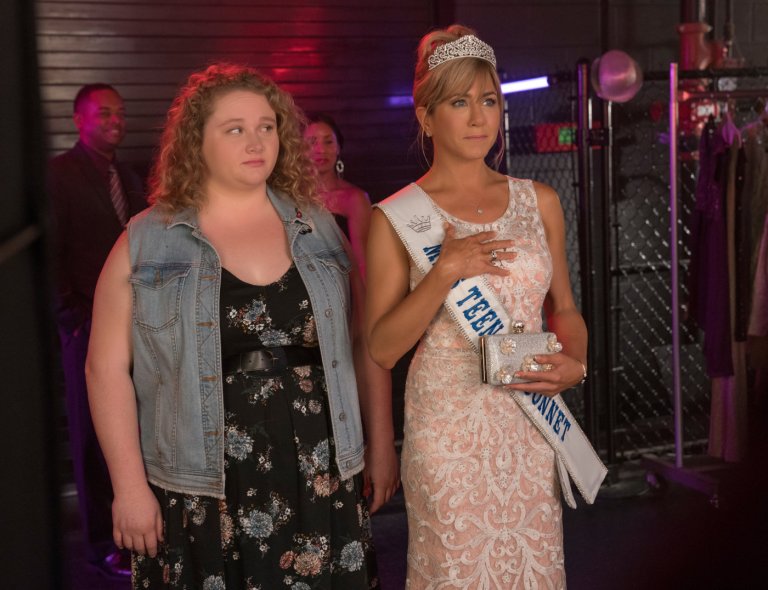 Fans of Dolly Parton will no doubt find a lot to love in the new Jennifer Aniston-led movie, DUMPLIN’. The country music legend wrote six new songs for the film and re-worked six previously recorded oldies but goodies with a little vocal help from friends Sia, Miranda Lambert and Macy Gray.

Based on the 2015 YA novel of the same name by Julie Murphy, the Netflix film tells the story of plus-sized teen, Willowdean Dickson (Danielle Macdonald, PATTI CAKE$; LADY BIRD), who is dubbed “Dumplin'” by her mother Rosie (Aniston, OFFICE CHRISTMAS PARTY), a former Texan beauty queen. As we learn through flashback and voiceover, while Rosie was busy running beauty pageants across the state, Will (as everyone else calls her) was being raised by her Aunt Lucy, who was large in size as well. Early on, Lucy introduced Will to two people who have stuck with the girl over the years. The first is Will’s best friend, Ellen (Odeya Rush, GOOSEBUMPS; LADY BIRD), and the second is Dolly Parton, or rather her music which has become the soundtrack to both teens’ lives. After Will finds Lucy’s application to try out for the Miss Teen Bluebonnet Pageant, Will decides to try out for this year’s pageant as a protest for its ongoing glamorisation of thinness. She’s quickly joined by Ellen and two other classmates, Millie, who is also plus-sized, and Hannah, who is a rebel feminist. As much as Rosie is afraid that the girls are going to spoil her event and embarrass themselves and her in the process, she agrees to let them participate. Meanwhile, Bo (Luke Benward), the hunky guy Will works with at the local diner after school, starts taking a shining to her and she doesn’t know what to do about it because, as she says, guys like him don’t go for girls like her. Will Will win the beauty pageant and the guy or are fat people resigned to live life on the sidelines?

I’m a horrible person. I don’t get why we have to have a celebration every time a movie about a non-traditional character is made. Do people really not know that fat people can act too? I can certainly appreciate that we don’t see enough friendly, outgoing, down-to-earth large-sized, or gay for that matter (I’m thinking of the film LOVE, SIMON), characters on screen but when they do finally show up there, why are their stories always so vanilla? “Wow! The fat/gay/sexually fluid kid has the same hopes, fears, dreams and wishes that I do!” Yeah, yeah. I get it. I don’t need to bashed on the head with it. Maybe other people still do and that’s why these stories are told. I look forward to the day when we can watch a film and not notice that a character is overweight or whatever.

But here we are in 2019 when we still have to have stories that remind us that fat people are human too. Given that’s what DUMPLIN’ is about, it does what it says on the box. Macdonald does a good job making Will a very sympathetic and relatable character even if you’re not her size. She’s the best thing about this movie, presenting a strong, young woman who knows herself well but still has some insecurities underneath. Aniston, on the other hand, continues her streak playing different versions of herself. She has moments when we remember that she can be funny but all too often she drops her “southern belle” accent and becomes Jennifer Aniston in a beehive hairdo and rhinestone tiara. Faring even worse, sadly, are Aunt Lucy’s female impersonator friends who have got to be the dullest group of drag queens north of Donald Trump’s border wall. (One of them, Ginger Minj, really is a drag performer but is woefully underused here.) I like vanilla as a flavour but even I have my limits.

There is a better story here. It’s riskier, flashier and it challenges the audience more. I hope the next film that tackles body image will be that story. Oh, and less Dolly Parton please.

One thought on “Movie Review: Dumplin’”