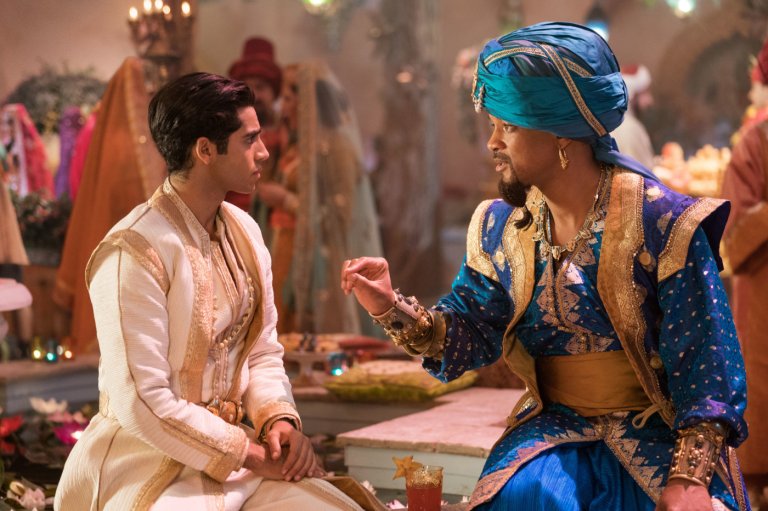 It’s been a busy time for the suits at Disney as they continue to milk their catalogue of animated classics by turning them into live action films. This year alone we’ve had DUMBO; THE LION KING is coming in July, MALEFICENT: MISTRESS OF EVIL (a sequel to the spin-off of Disney’s SLEEPING BEAUTY, to be accurate) in October, and the LADY AND THE TRAMP (which will only be available on Disney’s new streaming service, apparently) in November. Seven more films are currently in some stage of development. While all of these live-action adaptations make wads of cash for Disney and some are pretty good films in their own right, not one so far has been able to capture the magic of its animated counterpart. The Sword of Damocles hanging over the live-action adaptation of ALADDIN is that is everyone is going to compare it to the 1992 animated version. To the credit of director and co-writer Guy Ritchie (KING ARTHUR: LEGEND OF THE SWORD; LOCK, STOCK AND TWO SMOKING BARRELS) and the film’s star, Will Smith, (COLLATERAL BEAUTY; CONCUSSION), they at least try to forge a new path and create a whole new ALADDIN for today’s audiences but, unfortunately, they don’t go far enough. What we’re given is a reasonably entertaining film that’s certain to be a money-maker but it lacks magic.

Ritchie, known for his gritty aesthetic and his love of “fast slow motion” speed ramping, seemed like an odd choice to direct a wholesome Disney movie but perhaps that’s what the suits wanted – someone who would bring a fresh perspective to this beloved story, which he does. There’s still the story’s overarching theme of being true to yourself, but now there’s more emphasis placed on breaking the chains that bind each of the characters. Aladdin still dreams of being something more than a street rat, and Genie still dreams of freedom. Jafar still dreams of power but now we’re given some of his backstory. It seems he was once not all that different from Aladdin but, as he tells the young man, “Steal an apple, you’re a thief. Steal a kingdom, you’re a statesman.” (I couldn’t help but think of a certain American when he said that but maybe I was reading more into that insight than was intended.) Jasmine, too, has bigger dreams than just being someone’s obedient wife. She wants to succeed her father as the next sultan of Agrabah. (Wouldn’t that make her a sultana or is that word just reserved for raisins?) And the Sultan himself is hampered by a constitution that says his successor must be a man. Hardly a strong chain, I know.

But somewhere along the way Ritchie’s fresh perspective got muddled up by the ghost of Robin Williams. When Smith is in full blue genie mode, he’s a poor copy of Williams, who was at his improvisational best back in 1992. Though Smith puts some of his own spin on the character, it seems like he’s trying too hard. As I was leaving the cinema, I heard someone refer to this Genie as the “Fresh Prince of Agrabah”, which is a pretty apt description of Smith’s portrayal – a cross between Robin Williams’ Genie and Smith’s own acting career-launching TV character, The Fresh Prince of Bel-Air. It didn’t work for me. He was far more enjoyable to watch when he was masquerading as the servant/wingman of Prince Ali of Ababwa but, to be honest, didn’t we seen that version of Smith in his 2005 film, HITCH?

What disappointed me more is how the Cave of Wonders is realised. Someone on the production side forgot about that key word – “wonder”. From how the cave is just sitting there in the desert for anyone to approach, to the distinct lack of riches inside, this cave is completely underwhelming and I’m not sure why. That’s what CGI is for.

ALADDIN is far from being a complete disappointment though. Egyptian-Canadian actor Mena Massoud (TV’s TOM CLANCY’S JACK RYAN) gives it his all as the title character from the get-go, as he parkours his way through Agrabah’s souk, narrow alleys and rooftops while singing Oscar-winner Alan Menken’s song, “One Jump Ahead”. His delight in being in this film is written all over his face. British-Indian actress Naomi Scott (THE 33; soon to be seen in the CHARLIE’S ANGELS reboot), as the newly female-empowered Princess Jasmine, is just as enjoyable. Her big number is a new tune called “Speechless”, by the Oscar, Tony and Grammy award-winning team of Benj Pasek and Justin Paul (LA LA LAND; THE GREATEST SHOWMAN), that she gets to belt out not once, but twice. Although the pair’s rendition of the film’s signature tune, “A Whole New World”, doesn’t soar quite as high as the previous versions by Lea Salonga/Brad Kane and Regina Belle/Peabo Bryson do, it’s not bad at all. Dutch actor Marwan Kenzari (MURDER ON THE ORIENT EXPRESS; THE MUMMY; BEN-HUR (2016)) has received some flak for being a “young and hot” Jafar but I wasn’t bothered by his performance. I’ll concede that the animated Jafar is more menacing that this one is but if you’re going to point fingers, they need to point to Ritchie’s writing and direction rather than Kenzari’s acting.

Even with its shortcomings, this ALADDIN is still well worth seeing. It’s not as good a remake as THE JUNGLE BOOK (2106) and it’s definitely not as good as the animated version of ALADDIN but it’s entertaining enough.

Watch the review recorded on Facebook Live on Friday, May 24th at 8:30 am HK time!