Since we’re now having our first big typhoon of 2019, I thought I’d repost one of my old roundups of movies to watch on typhoon days. I guess I’d better start writing up some new reviews for the season though. I’ve got a few in the hopper. Enjoy!

With the 2018 typhoon season now upon us, I thought it would be a good time to do another roundup of movies to watch on typhoon days. (If you’re not familiar with our weather here in Hong Kong, when a typhoon, which is similar to a hurricane or cyclone, gets close to the territory, the place completely shuts down. We get at least two hours’ notice so everyone runs to the supermarket to stock up on various essentials. For most foreigners, that means beer and potato chips. For the locals, however, it means dozens of rolls of toilet paper for some reason that I have yet to understand. Then we go home and wait it out.) No matter where you live, if you find yourself housebound for a few hours, check out these recently released movies that you may not have heard of. They’re available on the various subscription services and on disc. As I’ve said in previous editions of this roundup, you actually don’t need to wait for a typhoon to watch these films. They’re good enough to watch anytime.

Most fantasy films are about boys so I KILL GIANTS presents a nice change from the norm. But this film is not just about a girl. There’s barely a boy to be seen.

Barbara (Madison Wolfe, JOY; TRUMBO) is a 12-year-old Dungeon & Dragons fan who lives along with her older brother and sister in a New Jersey coastal town. Their parents are nowhere to be seen and her sister, Karen (Imogen Poots, SHE’S FUNNY THAT WAY), seems to be in charge of the household. Barbara is a loner at school, shunned and bullied by her classmates because she has a very active imagination. As she tells her new – and only – friend, Sophia (Sydney Wade, TV’s WOLFBLOOD), she finds, hunts and kills giants. Barbara believes that giants cause the world’s ills and it’s her job to ensure they don’t come to destroy their small town. Not surprisingly, her anti-social behaviour at school often gets her into hot water and lands her in the office of school counsellor Mrs. Mollé (Zoe Saldana, AVENGERS: INFINITY WAR; GUARDIANS OF THE GALAXY series; the new STAR TREK series), who struggles to understand why Barbara prefers to live a fantasy life of monsters and magic potions. But is it a fantasy or is Barbara seeing something that the rest of us cannot?

Directed by first-timer, Danish director Anders Walter, and based on screenwriter Joe Kelly’s graphic novel of the same name, I KILL GIANTS is a unique coming-of-age film about demons both imaginary and real. Young Wolfe does excellent work as the story’s spunky and highly intelligent but deeply complicated protagonist. Unfortunately, the story relies on a big reveal at the end which exposes a gargantuan plot hole but, ignoring that, this is an enjoyable – dare I say even educational – story about accepting that bad things sometimes happen to good people.

This is a film that’s well worth checking out with your pre-teen and teenaged kids. 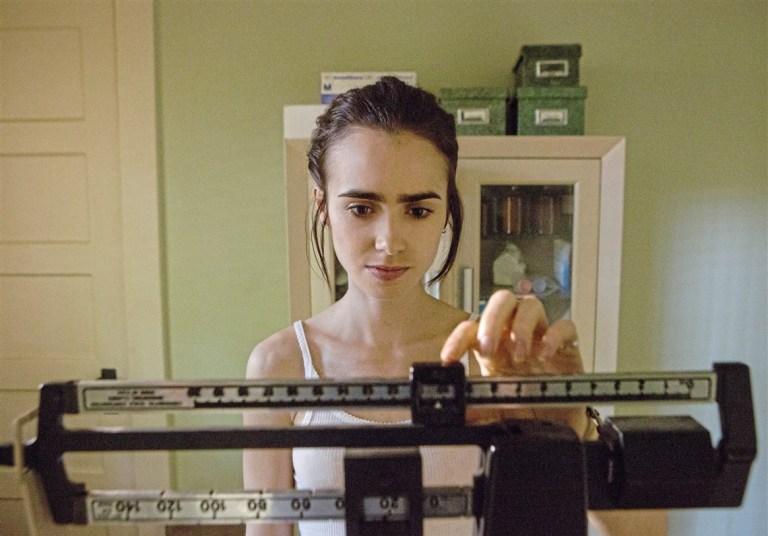 I realise that convincing you to check out a film about an eating disorder is going to be a tough sell but here goes: TO THE BONE is more than just a tear-jerker TV movie-of-the-week about a disease. For starters, not everyone in this film gets to live happily ever after. If it helps, I didn’t cry at all and I’m a softie. There are also some suburb performances, beginning with the film’s star, Lily Collins (OKJA).

Twenty-year-old college dropout Ellen (Collins) is an amateur artist who has gained a substantial following for her drawings of an anorexic girl that she posted on her social media page. When one drawing sent a young girl into an emotional tailspin that resulted in her death, Ellen took it personally, affecting her own state of well-being. After attending numerous in-patient programs and failing to make any progress, at the request of her chatty but well-meaning stepmother, Susan (Carrie Preston, TV’s TRUE BLOOD), Ellen agrees to join yet another program run by Dr. William Beckham (Keanu Reeves, JOHN WICK), who is known for his non-traditional treatment methods. She moves into a group home along with five other young women and a young man, who are all struggling with this eating disorder to degrees of success that vary on a daily basis. For Ellen, it’s eventually becomes too much and she leaves the group home and heads to her estranged mother’s, Judy’s (Lili Taylor, TV’s SIX FEET UNDER), horse ranch that she shares with her partner, Olive (Brooke Smith, TV’s GREY’S ANATOMY). It’s there, after probably her first-ever heart-to-heart conversation with her mother, where she decides whether she really wants to live or not.

TO THE BONE is the feature film debut of writer-director Marti Noxon, who made a name for herself as a writer and director on TV’s BUFFY THE VAMPIRE SLAYER. The story is loosely based own Noxon’s on struggle with anorexia. Interestingly, actress Collins also battled with the eating disorder a few years ago, adding to the story’s authenticity. Collins apparently lost a fair bit of weight for the role – she won’t reveal how much – but she has been quick to add that makeup and lighting made her look much thinner than she really was.

To its credit, the story doesn’t shy away from shining a harsh light on the various ways that anorexics try to manage and hide their disorder. There is a conversation between two young women in the house who discuss their favourite foods to purge. It would be funny if it weren’t realistically grim. Similarly, it also shows how the disorder affects everyone in the family, an issue that rarely gets attention. The film’s closing act, however, seems somewhat forced, offering a simple solution to addressing the deep-rooted causes of Ellen’s illness. Perhaps this was how Noxon herself found the way to move forward. If it was, it was definitely non-traditional.

All in all, TO THE BONE is a good film about a very difficult subject. We all know someone who battles, or has battled, an eating disorder. For that reason alone, it’s well worth watching.

So much more than just a coming-of-age tale about a boy and his horse, LEAN ON PETE tells the unsentimental and often heartbreaking story of 15-year-old Charley Thompson (Charlie Plummer, ALL THE MONEY IN THE WORLD), who embarks on a journey across America’s northwest in search of someone who can give him a home. The film is based on the 2010 novel of the same name by Willy Vlautin.

As the film opens, we see Charley unpacking his sports trophies in his bedroom. He’s recently moved to Portland, Oregon from Spokane, Washington along with this father, Ray (Australian actor Travis Fimmel, TV’s VIKINGS), who is a bit of a low-life who enjoys his beer and his women a bit too much for his own good. Although Ray is not a bad person, he loves his son but he doesn’t have the ability to give the boy what he really needs. Charley, though, has an indelible spirit and he makes the best of a lousy situation. One day while out running, Charley comes across a horse stable and he gets himself a job working for Del (Steve Buscemi, THE BIG LEBOWSKI), an acerbic horse trainer who races quarter horses for a living, including an aging one named Lean On Pete. Charley immediately bonds with Pete and when he learns that Del is going to sell the horse for slaughter, he decides to take Pete and run away with him. Along his journey, Charley puts his faith in various adults who disappoint him but he remains resolute when most kids his age would just pack it in and turn to drugs and prostitution. Even as he’s on his last legs, he doesn’t give up hope that there is someone out there who will give him what he needs.

The film marks the American debut of British writer-director Andrew Haigh, who has already received critical, though not commercial, praise for his films, WEEKEND and 45 YEARS. When LEAN ON PETE premiered last year at the Venice Film Festival, it received a 7-minute standing ovation and rightly so. Young Plummer delivers a powerful and sensitive performance that is well beyond his years and experience in front of the camera. There is one poignant scene where Charley meets a young woman who is being verbally abused (and possibly worse) by her grandfather. When he asks her why she puts up it, she tells him that she has nowhere else to go. Although her words are heartbreaking to hear, we see Charley processing her despair into something that will provide him with the strength to get to that place where he can go and be safe.

LEAN ON PETE is an amazing film. Definitely check it out and then when Andrew Haigh and Charlie Plummer become household names, you can tell your friends how great this film is. Just make sure you mention that you heard about it here first.

Watch the review recorded on Facebook Live in RTHK Radio 4’s studio on Thursday, July 19th at 8:30 am HK time!

One thought on “Movie Reviews: Movies to Watch on Typhoon Days (Or Anytime) 3 (Repost for 2019)”