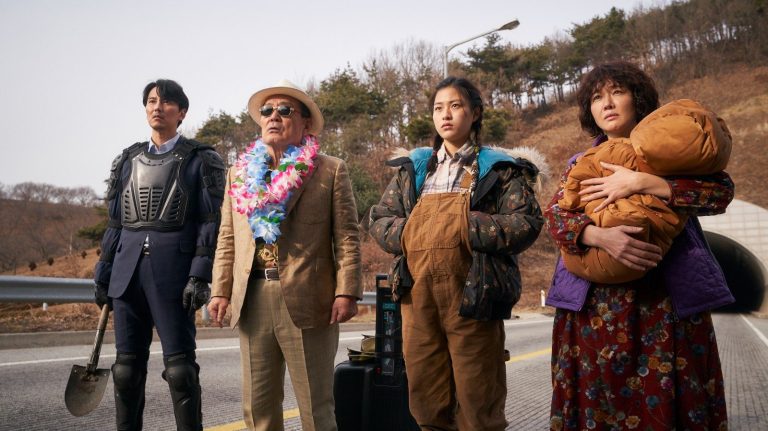 Just when you thought (hoped?) that you’ve seen the last of zombies on film for a long time, along comes a quirky zomcom from South Korea that may just breathe new life into the undead genre. THE ODD FAMILY: ZOMBIE ON SALE doesn’t reinvent the wheel but it does make for an enjoyable ride.

As THE ODD FAMILY: ZOMBIE ON SALE opens, we learn that a biotech company that has been working on a new type of insulin has engaged in some shady R&D that has resulted in a virus being unleashed on the Korean population. That virus, it turns out, creates zombies out of diabetics, but when one of the newly-created walking dead shows up in the quiet, country village of Poongsan, no one seems to take much notice of him. That is, until he takes a nip out of the head of villager Park Man-Deok (Park In-Hwan/박인환). Park runs the town’s gas station and repair shop along with his three adult children, Joon-Gul (Jung Jae-Young/정재영), Min-Gul (Kim Nam-Gil/김남길) and Hae-Gul (Lee Soo-Kyung/이수경), and Joon-Gul’s heavily pregnant, no-nonsense wife, Nam-Joo (Uhm Ji-Won/엄지원). The family is a complete bunch of grifters, scamming anyone and everyone whenever they can. Min-Gul, who has just returned from Seoul after being fired from his job, is the first to realise that they have a zombie in their midst and he hastily prepares a survival manual, which the family immediately dismisses when Man-Deok wakes up the next morning looking younger and fitter than he has in decades. Naturally, Min-Gul, Joon-Gul and Man-Deok see an opportunity to cash in on this fountain of youth, and they create a cottage industry where their cabbage-and-gochujang-loving pet zombie, now named Zzong-bi (Jung Ga-Ram/정가람) by Hae-Gul, bites the arms of old men in the village who are more than willing to part with tidy sums of money in exchange for a moment of pain and a new lease on life. Of course, all good things must come to an end at some point and they do so here with hilarious consequences.

I am neither a fan of Korean cinema nor the zombie genre so THE ODD FAMILY: ZOMBIE ON SALE was going to be a tough sell for me but I enjoyed it. Admittedly, the plot is completely bonkers and it does borrow from some other films of this genre but it was very well written by director Lee Min-Jae (이민재) with plenty of amusing twists and turns along the way. The Parks are such loveable reprobates that you want them to succeed even when you know that you shouldn’t. A couple of the film’s set pieces are deliciously way over the top (sorry, I couldn’t resist), culminating in a fireworks sequence that wouldn’t seem too out of place in a certain Michael Jackson video.

THE ODD FAMILY: ZOMBIE ON SALE has so far only been released commercially in a few markets in this part of the world. It’s opening tomorrow (August 8) in Hong Kong, so if you’re looking for something to forget about all our recent political turmoil if even for a few hours, this is a great choice.

One thought on “Movie Review: The Odd Family: Zombie On Sale (기묘한 가족)”