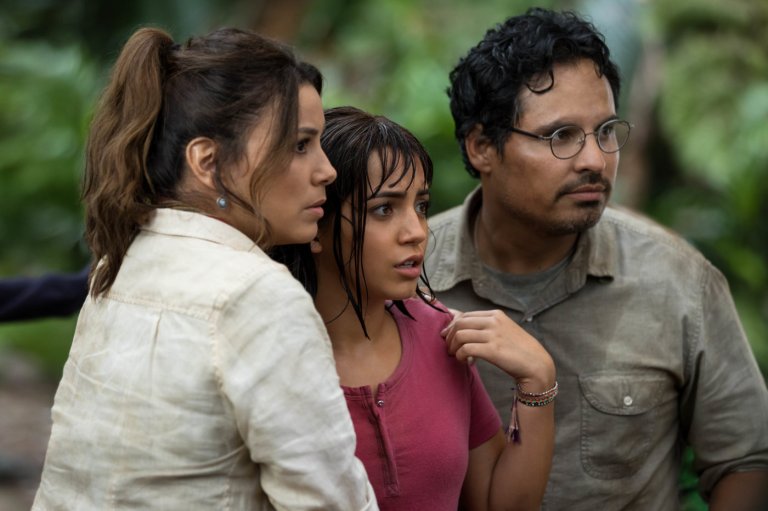 If you’re of a certain age (i.e., much younger than me), or if you have young kids, you’re probably well aware of Dora, the seven-year-old Latina who explores the world along with her anthropomorphic monkey, Boots, named for the red boots that he wears. The animated Nickelodeon character is noted for infusing her English with a bit of Spanish, breaking the fourth wall, counting and singing simple songs that the show’s target audience can easily learn and sing along with. Dora the Explorer is an intelligent breath of fresh air compared to the many cartoons on TV today that range from the inane to the violent. After numerous foreign language TV adaptations, books, video games, stage adaptations and toys, Nickelodeon’s corporate cousin, Paramount Pictures, has finally realised that a live action adaptation may just make some money too.

DORA AND THE LOST CITY OF GOLD stars Isabela Moner (INSTANT FAMILY; SICARIO: DAY OF THE SOLDADO) as the titular character. If you’re thinking, “Wait a second! Isn’t Moner a teenager?” Yes, she is, so the film’s screenwriters wisely aged Dora up to now be a 16-year-old. She’s still irrepressibly chipper, and she still does all the things that the cartoon Dora does, including talking to the audience, much to the confusion of her explorer parents, Cole (Michael Peña, ANT-MAN AND THE WASP; COLLATERAL BEAUTY; THE MARTIAN; AMERICAN HUSTLE) and Elena (Eva Longoria, TV’s DESPERATE HOUSEWIVES). In the film, Dora’s parents decide to send their daughter to Los Angeles to become socialized after having spent most of her life in the Peruvian jungle. In L.A., Dora lives and attends high school with her primo, Diego (Jeff Wahlberg, Mark & Donnie’s nephew). Though they were once mejores amigos, Diego now finds Dora’s quirks to be a pain in the culo, though that doesn’t stop the young woman from roping him; Sammy (Australian actress Madeleine Madden), the class’ uptight president; and Randy (Nicholas Coombe, MIDNIGHT SUN), the class’ astronomy nerd), into her latest adventure – finding Parapata, Peru’s Lost City of Gold. But a team of mercenaries are searching for Parapata too, and Dora and her friends must use their brains and teamwork to overcome a series of obstacles and solve the mystery before they do.

DORA plays out like a cross between an INDIANA JONES film and a SCOOBY-DOO episode, which isn’t a bad thing. Unfortunately, it doesn’t go as far in that direction as it should have to make the film interesting to anyone other than a five year old. Too often, the teenagers are shown to be more mature than the adults, with old folks often resorting to slapstick to add some humour to the story. Mexican actor Eugenio Derbez (OVERBOARD) is particularly cringe-worthy as Alejandro Gutierrez, a Peruvian explorer and professor who accompanies the teens on their adventure. To the story’s credit though, it’s both highly educational and aspirational with numerous opportunities for Dora and friends to show off their STEM skills. In Dora’s world, being smart, rather than being a smart ass, is an asset.

DORA AND THE LOST CITY OF GOLD is wholesome family entertainment. It’s not as good a film as it could have been but young kids will enjoy it just fine. And for the adults who will bring them to the cinema, that’s good enough. If the suits at Paramount have any sense, they’ll greenlight a sequel right away.

3 thoughts on “Movie Review: Dora and the Lost City of Gold”