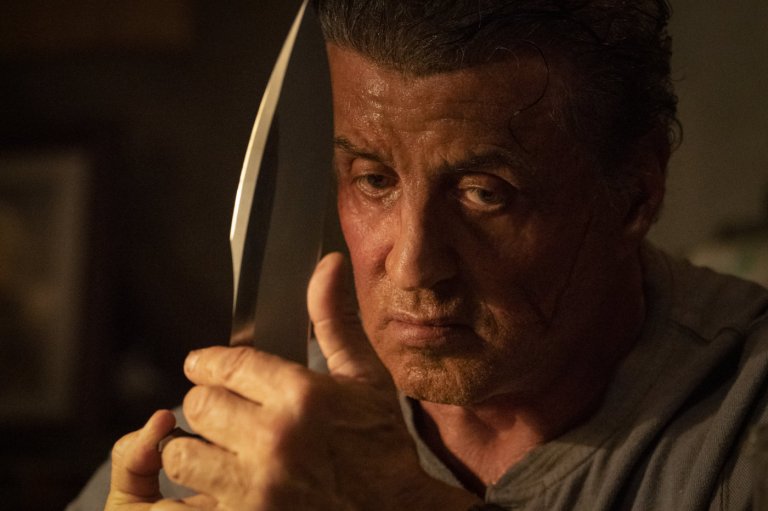 It’s the sequel that no one asked for but got made anyways. John Rambo (Sylvester Stallone, CREED II; CREED) is back and this time he’s taking on a Mexican human trafficking and prostitution syndicate.

RAMBO: LAST BLOOD is the fifth in the series of the ex-soldier with a heavy case of PTSD that began way back in 1982. Since that time, Rambo has battled anti-veteran prejudice in small town America, gone to prison, rescued forgotten American POWs in Vietnam, received a presidential pardon, moved to Thailand, fought alongside the Mujahedeen in Afghanistan against the Russians (how times have changed!), become a snake catcher and tangled with an evil Burmese military commander. Who writes these scripts – the GOP? Now Rambo has retired to his late father’s horse farm in Bowie, Arizona, which he shares with Maria (Adriana Barraza, DORA AND THE LOST CITY OF GOLD), a woman who has worked on the farm all her life, and her teenage granddaughter, Gabrielle (Ariana Grande lookalike, Yvette Monreal), except that they live in the ranch house and he lives in a labyrinth of tunnels that he has built under the property. Though he still takes plenty of medication for his PTSD, Rambo’s life is fairly quiet and routine. All that changes when Gabrielle tells him that she’s has found where her deadbeat dad has been living on the other side of the border in Mexico. Against Rambo’s wishes, Gabrielle decides to go see the man who abandoned her mother and her years before but she’s not in the country more than a few hours when she gets kidnapped and placed in a prostitution ring run by the Martinez brothers, the all-business Hugo (Sergio Peris-Mencheta, LIFE ITSELF) and the coke-snorting hothead Victor (Óscar Jaenada). As soon as Rambo finds out what has happened to the girl, he goes down to Mexico and, well, it’s not that hard to guess the rest.

While the RAMBO franchise has been a modest money maker for the various studios that have produced the films over the years, with the exception of the first film, FIRST BLOOD, the series has not been a critical success with each successive film garnering significantly more disdain than praise. RAMBO: LAST BLOOD is certain to reach new levels of scorn as it is a complete cheese extravaganza. The movie is a throwback to ’70s filmmaking with over-accentuated sound effects, hard zoom in shots, stilted dialogue, cardboard characters, story arcs that barely go anywhere before they’re jettisoned, and worst, violence against women. A good thirty minutes is spent on exposition, which is crazy for a movie that is just under an hour and a half in length, and it is full of mock sentimentality so that we might actually care when Gabrielle gets scooped up by the bad guys. Audiences can only be bored silly for so long before they completely lose interest in the plot. My earlier questioning of whether the RAMBO films are Republican Party recruitment tools is solidly reinforced here with the portrayal of Mexicans as, according to a certain American, “drug dealers, criminals and rapists”.

Someone really needs to build a wall around director Adrian Grünberg, who previously directed Mel Gibson in the largely unseen but well received 2012 film, GET THE GRINGO. With RAMBO: LAST BLOOD, Grünberg has delivered what may end up being his career lowlight. One can hope. Stallone also deserves some knuckle-rapping too, as he was one of the film’s two co-writers. He clearly didn’t learn anything from his experience with the ROCKY/CREED franchise and he has given audiences a pitiful end to this saga. On the other hand, the actor, who is still going strong at 73, has said that he may be up for one more at bat. Who knows? Maybe next time he’ll take on greedy pharma company executives from his nursing home.

RAMBO: LAST BLOOD will definitely be on my list of least liked films of 2019. It’s unabashed jingoistic garbage. Watch it at your own risk.