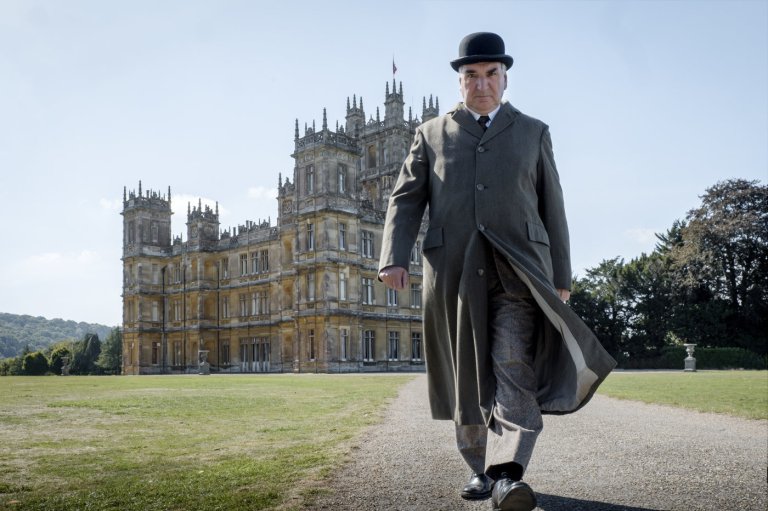 Our dear friends, the Crawleys, their extended family and their loyal staff are back and the stakes couldn’t be higher as they land on the big screen for the first time. After at least a decade and a half of entertaining various dukes, counts, earls, viscounts and lords and their wives at their extravagant home set in the rolling green hills of Yorkshire, the Crawleys’ guests this time around are none other than the king and queen. That’s HRH King George V and his wife, Queen Mary, to you and me.

Even though it’s been five years since the highly acclaimed British series left our TV screens, the grandfather clock in Downton Abbey’s Main Hall has barely inched forward. The time is now 1927 – a scant 18 months or so since Lady Edith’s (Laura Carmichael) wedding – and although streetcars have now come to Downton Village, not much has happened with either the estate or the people who live or used to live there. Everyone, including Granny, the Dowager Countess (Dame Maggie Smith), is still alive, and anyone who was the least bit ill when we last saw them, is now in perfect health. (I’m referring to you two, Carson (Jim Carter), and Lord Merton (Douglas Reith)). Lady Mary (Michelle Dockery) is still a cow who rolls her eyes at every opportunity; Lady Edith is still moaning over something trivial and this time it’s an ill-fitting dress that she had ordered for the ball; Tom (Allen Leech) is still just as faithful as ever to his in-laws even as those loathsome imperialists ride up in their gold and maroon coaches to the manor’s front door; cousin Isobel Grey (Penelope Wilton) still pops by on a daily basis to trade well-timed zingers with the Dowager Countess; and the Earl (Hugh Bonneville) and Countess (Elizabeth McGovern) of Grantham are as oblivious as ever to whatever machinations are going on behind their backs. Life downstairs hasn’t changed much either. Thomas (Robert James-Collier) is still in charge of the butlers and valets while Mrs. Hughes, now Mrs. Carson (Phyllis Logan), still oversees the maids and the kitchen staff. Mr. Carson, meanwhile, putters away at home in his vegetable garden in blissful retirement. Mrs. Patmore (Lesley Nicol) still runs the kitchen like a well-oiled machine along with her whiney assistant, Daisy (Sophie McShera), who is now sort of engaged to milquetoast Andy (Michael C. Fox), the butler. Of course, the ever-reliable Bateses (Brendan Coyle and Joanne Froggatt) are still there, as is Baxter (Raquel Cassidy), while Molesley (Kevin Doyle) is still teaching at the local school. Did I get everyone?

With such a huge cast, it must have been a challenge for series creator and writer Julian Fellowes to make sure everyone had their moment in the spotlight and that’s the big problem with this film. The Royals’ visit is the core of the film but it’s really a one-note plotline. (If you’ve seen the trailer, you already know what it is.) Fellowes knows, though, that while the fans love seeing all the beautiful costumes and watching the staff polish the silver until it gleams, what they really want is more stories about the Crawleys et al. That’s why he throws in two heaping cupfuls of subplots involving Carson, Thomas, Tom, the Dowager Countess, Edith, Daisy and Andy, all of which get resolved far too quickly, far too easily and far too satisfactorily in order to keep the film’s running time down to just over two hours. If Anna should ever lose her job as a lady’s maid, she can always start on a new career as a private detective. Here, she solves an ongoing mystery at warp speed with absolutely no clues to go on, or at least none that the audience is aware of.

That’s not to say that DOWNTON ABBEY is bad. It’s a fan service film with plenty of pomp, pageantry and attention to period detail that has become the hallmark of the series. But that shouldn’t be enough to warrant a big screen sequel and perhaps it would have been better if DOWNTON had stayed on the small screen and stretched out to a couple of specials when more time could have been spent diving into those subplots and giving audiences some character development to chew on. In the movie, only three characters have any sort of development and they all happen in a blink of an eye.

Even so, it’s very clear to anyone who sees this film that plans are afoot to make another movie sequel. So many storylines are left stacked up like society magazines ever so neatly on a side table in the Crawley’s stately Library that diehard fans will be screaming for more adventures of our favourite rich and not-so-rich folks before long. Before I saw this movie, I would have considered myself to be one of those fans. Now I’m less so.

DOWNTON ABBEY (the movie) is really only for fans of the TV show. If you haven’t watched it yet and you go see this film, you’ll be left wondering what all the hoopla was all about.