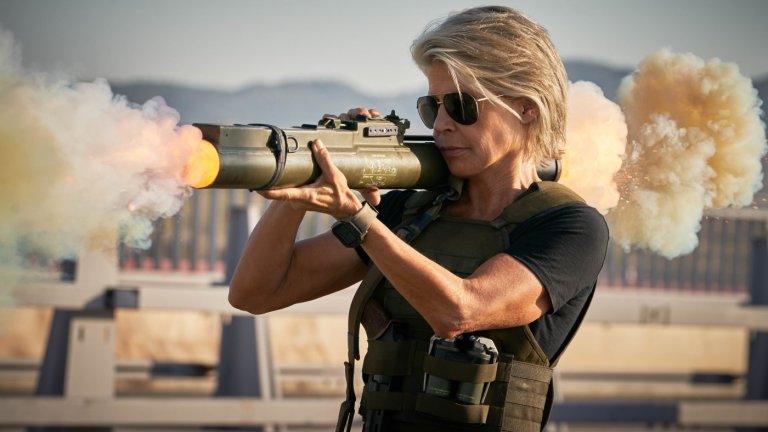 Arnie said he’d be back (a few times) and he is along with Linda Hamilton in the return of the TERMINATOR franchise that picks up soon after TERMINATOR 2: JUDGMENT DAY ends.

After a short preamble about a fateful event that took place in 1998, TERMINATOR: DARK FATE jumps forward to Mexico in 2020 where Dani Ramos (Venezuelan actress Natalia Reyes) suddenly finds herself being hunted down by a shape shifting man at her place of work. Before the stranger (Gabriel Luna, TV’s AGENTS OF S.H.I.E.L.D.) can kill her though, she’s whisked away by another stranger named Grace (Mackenzie Davis, TULLY; BLADE RUNNER 2049; THE MARTIAN), who informs Dani that she has come from the future to protect the young woman from terminators like the Rev-9 who want to kill her. Just as the two women’s fortune seems to run out, they are saved in the nick of time by none other than Sarah Connor (Linda Hamilton), who comes packing some serious heat. Sarah tells them that she received an encrypted message on her phone to be at a certain place at a certain time, and it’s not the first time that she’s received such a message. Grace, who is an augmented human (i.e., she’s bionic), is able to identify where the messages came from – a house outside of Laredo, Texas, where they find “Carl” (Arnold Schwarzenegger), a Model 101 T-800 terminator. Carl, who has been living in this timeline since 1998, has seen the error of his past ways and he tells the women that he will help them against the Rev-9 who is hot on their heels. But Sarah is somewhat suspicious of Carl’s motives as it’s not the first time that she and Carl have crossed paths.

Director Tim Miller (DEADPOOL) and a team of writers have wisely chosen to ignore everything that took place in the last three TERMINATOR films and TV series, and bring the franchise back to its roots. TERMINATOR: DARK FATE succeeds by reuniting the franchise’s two stars, who both have more than a few wrinkles and grey hairs than they did the last time audiences saw them together but whose characters are no less badass than they were an incredible 28 years ago. Also to its credit, the film features plenty of nifty special effects and stunts that up the ante considerably from the first two films. I saw the film in IMAX 2D and it may be worth shelling out the extra bucks here. If you loved the T-1000’s malleability, you’ll go wild over the Rev-9’s ability to split into two killing machines. Of course, both Carl and Sarah say the “I’ll be back” line or variations of it throughout the film too. On the downside, the story is very derivative of those first two films – a terminator comes back from the future to kill the leader of the Revolution, lots of fighting happens with plenty of collateral damage along the way, and the terminator takes a licking and keeps on ticking until it is finally deactivated. The End but is it? In TERMINATOR: DARK FATE, it seems that Dani is going to be our new hero going forward so if the film does well at the box office, and it probably will, we can expect to see another TERMINATOR film in a few years’ time.

TERMINATOR: DARK FATE is pure popcorn entertainment but it’s not going to leave a lasting impression on anyone. Of the three films, it comes in as the third best in the series. Fortunately for it, there are films 3, 4 and especially 5, and the TV series, that are far worse.