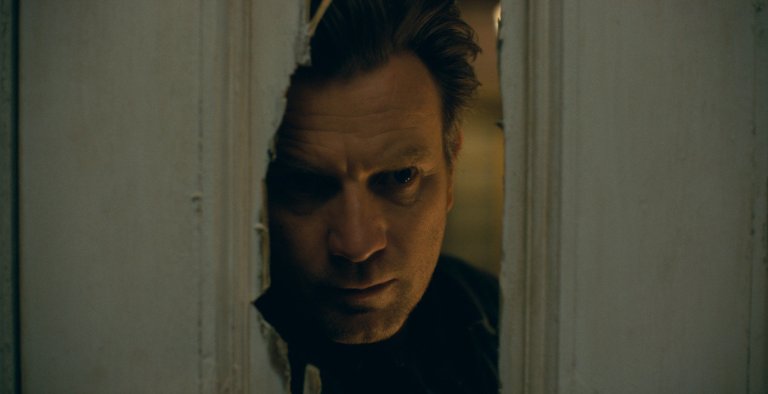 This has certainly turned out to be the Year of Stephen King at the cinema and on TV. We’ve already had PET SEMATARY, IT CHAPTER TWO and IN THE TALL GRASS, and now comes DOCTOR SLEEP, the sequel to his very successful book, The Shining. Or perhaps I should say that it’s the sequel to director Stanley Kubrick’s classic film adaptation from 1980 as DOCTOR SLEEP pays great homage to that film.

After a good fifteen minutes or maybe longer of “whatever became of” exposition that includes actors who look similar to Shelley Duvall (“Wendy Torrance”) and Danny Lloyd (“Danny”), the clock jumps ahead to 2011 where we find that the now grown up Dan Torrance (Ewan McGregor, STAR WARS: EPISODE VII – THE FORCE AWAKENS; AUGUST: OSAGE COUNTY) has become a self-destructive alcoholic like his father before him. He still has the shine though, and is still visited from time to time by the spirit of Overlook Hotel chef Dick Hallorann (now played by Carl Lumbly, A CURE FOR WELLNESS). Danny decides to move to a small town in New Hampshire to start afresh and he’s immediately taken under wing by Billy Freeman (Cliff Curtis, THE MEG), himself an ex-alcoholic. Thanks to his ability to hear people’s thoughts and see their past, Danny quickly lands a job at the town’s hospice tending to the dying where he earns the moniker “Doctor Sleep”. Eight years later, Danny is telepathically contacted by a young girl, Abra Stone (Kyliegh Curran), whose shine is far more powerful than his. Abra’s “magic”, as it is called here, is noticed by Rose the Hat (Rebecca Ferguson, MEN IN BLACK: INTERNATIONAL; MISSION: IMPOSSIBLE – FALLOUT; LIFE; THE GREATEST SHOWMAN; FLORENCE FOSTER JENKINS; HERCULES), a mysterious woman who leads a cult that feeds on the “steam” that is produced when someone who has the shine dies. When Rose and her gang make moves to get Abra’s steam, Danny decides that he needs to protect the pre-teen at all costs.

I’ll start by saying that I’m not a huge fan of THE SHINING. Yes, there are some scenes where Jack Nicholson is fabulous and there is some wonderful camerawork and sound design, but overall I was only mildly entertained. I still shake my head in wonder at how Shelley Duvall managed to have a career in Hollywood though legend or rumour has it that Kubrick terrorized her on the set. But perhaps it’s because I’m not a SHINING groupie that I generally enjoyed DOCTOR SLEEP. I’ll concede that the film is about 20 minutes too long and spends far too much time reminding audiences who the original characters were, but the story held my interest even if, like many of Stephen King’s stories, it takes the odd head-scratching leap in logic, and has a rather lame epilogue. Fans of THE SHINING will no doubt love all the nods and winks that writer-director Mike Flanagan (Netflix’s THE HAUNTING OF HILL HOUSE) has injected into this film, from the set recreations to the camera angles and sequences shot by Flanagan’s go-to cinematographer Michael Fimognari. There are so many that you may miss a few. I know that I completely missed a big one that my colleagues all picked up on but, by the same token, I noticed one that they all missed.

By far though, the best thing about DOCTOR SLEEP is Rebecca Ferguson, who not only has all the film’s best lines, she energizes the film every time she’s on screen with her performance as a bohemian Grim Reaper. Also enjoyable to watch is young Curran, who is appearing in just her second movie. Unfortunately, neither is enough to make DOCTOR SLEEP a newborn classic as it fails to sustain its tension throughout, though that may be more of a reflection of the source material than of a misfire on the director’s part. Whichever it is, King has indicated his approval of the film, which is something he hasn’t done for THE SHINING. The story also has some similarity to STAR WARS, with McGregor playing Obi-Wan Kenobi to Curran’s Luke Skywalker and Ferguson’s Darth Vader. I’m not saying that King ripped off George Lucas or vice versa. I’m just saying that the stories of good vs. evil and how some people are manipulated by the powers they are given are similar.

In any case, if you haven’t seen THE SHINING yet, don’t bother seeing DOCTOR SLEEP until you have because you’ll just be missing too much. Although DOCTOR SLEEP won’t go down in cinematic history as the best film adaptation of a Stephen King novel, it should be remembered as a fairly respectable one.