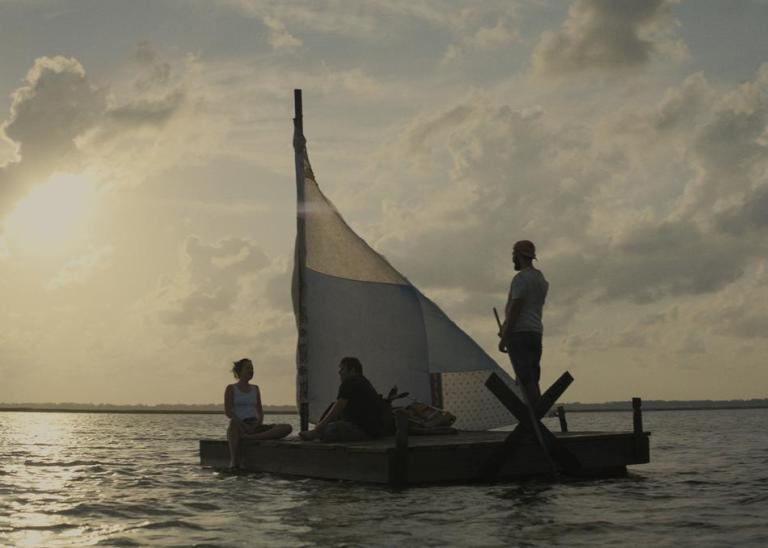 Who knew that Shia LaBeouf (THE NECESSARY DEATH OF CHARLIE COUNTRYMAN) could act? The star of three big-budget TRANSFORMERS films and the least well received INDIANA JONES film (though it should be noted that the latter film still managed to take in over US$780 million at the box office), has had a roller coaster of a time in his 21-year movie career. Many of his critics – me included – may just have to reassess their opinion of him after THE PEANUT BUTTER FALCON.

A modern-day Huck Finn adventure, THE PEANUT BUTTER FALCON tells the unlikely friendship between Zak (Zack Gottsagen), a young man with Down syndrome who has dreams of becoming a professional wrestler, and Tyler (LaBeouf), a troubled man who is on the run from a couple of crab catchers in North Carolina’s Outer Banks. The two meet up after Zak runs away from the nursing home where he lives and hides out in Tyler’s fishing boat. After Tyler torches his rivals’ crabbing equipment, he takes off down the cays headed for Florida where he hopes he can start life afresh. Zak, meanwhile, wants to go the wrestling school run by his idol, The Salt-Water Redneck (Thomas Haden Church, DADDY’S HOME; SIDEWAYS), which is in the same direction. Their journey together, on land and water, is full of adventure as the pair is chased by both the crabbers and Eleanor (Dakota Johnson, BAD TIMES AT THE EL ROYALE; SUSPIRIA; the FIFTY SHADES trilogy), the social worker at Zak’s home who needs to bring him back safe. Along the way, they learn a lot about each other and what they’re capable of when they start to believe in themselves.

THE PEANUT BUTTER FALCON is written and directed by Tyler Nilson and Michael Schwartz, who make their feature debut here. The pair met Gottsagen a few years earlier at acting class he attended and they knew they had to write a film around him. It’s refreshing to see a film where the lead actor has a real disorder and is not acting like he has one. Gottsagen is so good here that it’s not long before we, like Tyler, start to see Zak’s abilities rather than his disabilities. As for LaBeouf, he gives what may be his most honest performance to date and his scenes with Gottsagen are rich with heart. Bruce Dern (THE HATEFUL EIGHT; NEBRASKA) makes a brief appearance as Zak’s feisty and highly resourceful roommate, Carl. At 83, Dern is showing no signs of slowing down. He has six films and two video games currently in production.

The film premiered last March at the SXSW Film Festival where it took home the Audience Award in the Narrative Spotlight section. Outside of the US and a handful of other countries where it had a commercial release, it’s mostly been limited to the festival circuit, including the Taipei Golden Horse Film Festival where it will be screened three times in the coming days. No word on whether it’s coming to Hong Kong yet but it is available now on Amazon Prime Video.

THE PEANUT BUTTER FALCON is a wonderful story that will absolutely put a smile on your face and make you feel all warm and fuzzy inside. If you have a chance to see it, make sure you do!