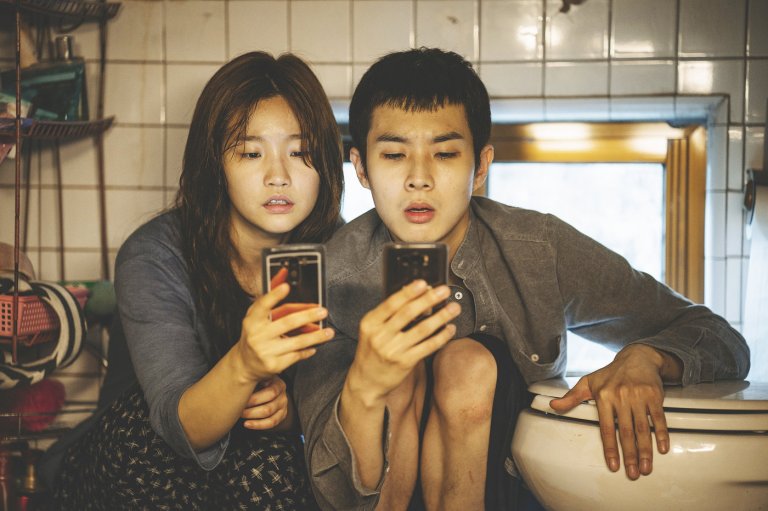 I’ll admit that I’m late coming to the PARASITE party but I’m glad I finally arrived. The latest film by Korean director Bong Joon-Ho/봉준호 (OKJA; SNOWPIERCER) is an absolute tour de force. With its mashup of genres and flawless performances all around, PARASITE is the early favourite to take home the Best Foreign Language Film award at the Oscars ceremony next February. It has already won the Palme d’Or at this year’s Cannes Film Festival in a unanimous decision from the jury.

Kim Ki-woo (Korean-Canadian actor Choi Woo-shik/최우식, TRAIN TO BUSAN; OKJA) is a young man who lives in a crowded and grotty sub-basement in one of Seoul’s back alleys along with his sister, Ki-jung (Park So-dam/박소담, THE PRIESTS), and parents, Ki-taek (Bong regular Song Kang-ho/송강호, SNOWPIERCER) and Chung-sook (Jang Hye-jin/장혜진, POETRY). The family struggles to make ends meet by working menial jobs and scamming whatever they can, whenever they can. One day, Ki-woo’s friend suggests to him that he pose as a university graduate and take over his job as an English tutor to the daughter of a very wealthy couple while he (the friend) goes overseas to study. After Ki-jung forges a diploma for her brother, Ki-woo heads off to the Park family’s spacious and immaculate home, located high on a hill in the upscale part of the city, to meet Choi Yeon-gyo (Cho Yeo-jeong/조여정, OBSESSED), the beautiful but naïve Park matriarch. Impressed with Ki-woo’s academic credentials and seemingly upper middle-class upbringing, she hires him on the spot. Then, after her daughter’s successful first lesson, she asks Ki-woo to recommend an art teacher for her young son. Ki-woo does, and Ki-jung arrives the next day posing as Ki-woo’s friend’s cousin’s art therapist. It doesn’t take long before the whole Kim family is working for the Parks but the Parks don’t know that the Kims are all related to each other. Their plan goes exceedingly well until the Parks’ former housekeeper arrives on the scene and threatens to expose the Kims’ parasitic scam.

The first half of PARASITE is a wickedly funny takedown of South Korea’s Two Percenters as the Kims creatively insinuate themselves into the Parks’ lives. To his credit, Bong never resorts to buffoonish characterisation or the camera mugging that plagues many films coming from this region. The Kims are smart, sympathetic and completely relatable even as they do dastardly things to the unsuspecting Parks. Then the film takes a sharp left turn in the third act, turning dark, and just as it looks like the proverbial runaway horse will head over the cliff, Bong shows his mastery and holds the reins tight bringing the story to a well-earned conclusion.

With its very timely message of the growing gap between the rich and poor in many industrialised countries and the false sense of entitlement that often comes with being wealthy, it’ll only be a matter of time before Hollywood remakes this film. They’ll probably ruin it so make sure you see the original. PARASITE is sheer brilliance!