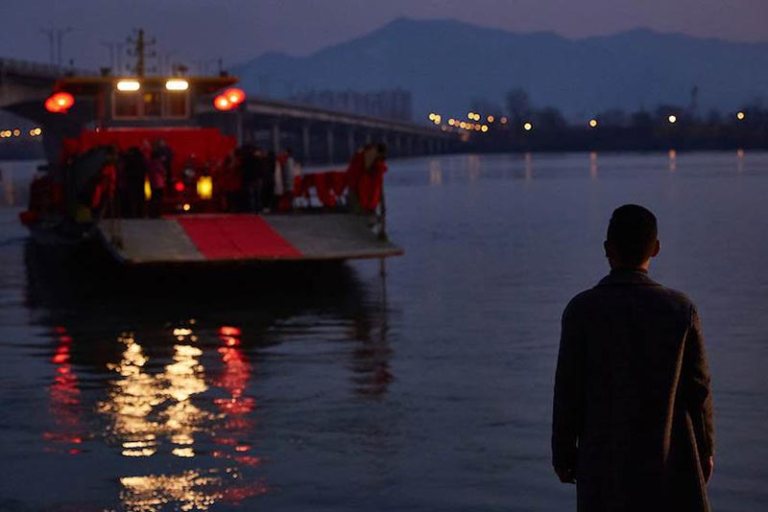 The scroll painting entitled, “Dwelling in the Fuchun Mountains”, by Yuan Dynasty (14th century) master Huang Gongwang/黃公望, serves as the inspiration for writer-director Gu Xiaogang/顧曉剛’s debut feature film of the same name. DWELLING IN THE FUCHUN MOUNTAINS follows the lives of the Yu family over the course of four seasons, unfurling like a scroll painting, in this immortalized, sleepy Zhejiang town-turning big city, located on the banks of the Fuyang River not far from Hangzhou.

DWELLING IN THE FUCHUN MOUNTAINS opens with the 70th birthday celebration for the family’s matriarch at the restaurant owned by her eldest son, Youfu. We quickly learn that Youfu and his wife, Fengjuan, recently lent his third brother, Youjin, three million RMB for an investment scheme that ended up turning sour, leaving Youfu and Fengjuan more than a little cash-strapped. Youjin, meanwhile, is a career scammer who is also in debt to a local gangster to the tune of a million RMB. He also has the additional burden of being the sole caregiver to his teenage son who has Down Syndrome. Things are barely better for the second brother, Youhong, who recently received compensation for his and his wife’s flat that was demolished to make way for a massive urban renewal project as the city gears up for the 2022 Asian Games in nearby Hangzhou. However, with the price of new flats skyrocketing in the city, the couple is forced to relocate to their fishing boat while they work out their next move, which includes being able to provide a downpayment for their son’s apartment as it looks like he’s going to get married soon. The youngest brother seems to be the least impacted by his family’s preoccupation with money. The still single, 37-year-old has just started dating a woman about his age though it doesn’t look very promising, perhaps because he isn’t obsessed with money like his siblings are. Meanwhile, Youfu’s daughter, Guxi, has started dating a very nice school teacher but, because he doesn’t come from money, Youfu and especially Fengjuan are very much against the relationship and force her to choose between family and love.

If Gu’s story is supposed to be an indictment of the greed and money fixation that seems to be afflicting so many people north of the border in recent years as the country gallops toward a modern future, that message unfortunately gets lost in a myriad of subplots and drawn out scenes involving the various family members that have little to do with moving the story forward. With a running time of 2-1/2 hours, the film is about 30 minutes too long. I counted eight times when the film easily could have wrapped up but Gu doesn’t seem to understand that less is often more. Gu has said that he plans to make this film the first of his scroll painting trilogy, entitled “A Thousand Miles Along the Eastern Yangtze”. If he’s successful, I hope that someone will rein him in because his basic premise is good. It’s just his execution that needs some work.

The film premiered at this year’s Cannes Film Festival as part of its Critics’ Week section and has already garnered a handful of awards both inside China and overseas. It is scheduled to open commercially in France early in the new year, and will probably come to Hong Kong in the spring. Whether you decide to see it or not should depend on how much patience you have.