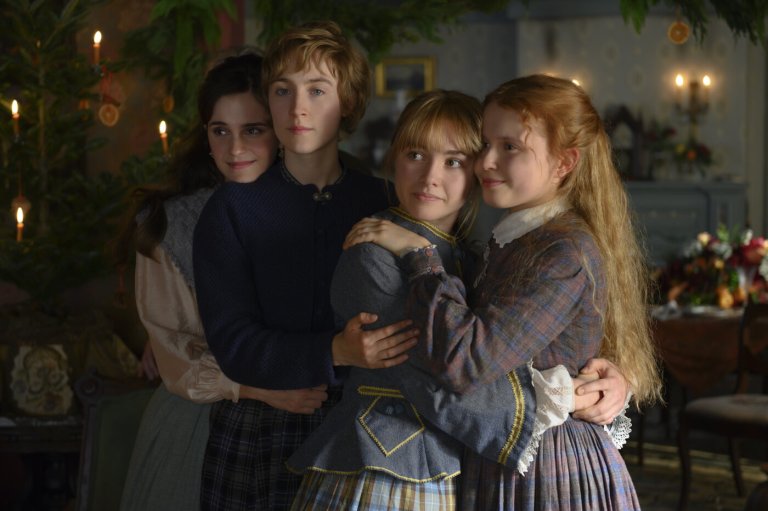 Two thousand and nineteen may just be remembered as the Year of the Reboot. While some films like BLACK XMAS, CHARLIE’S ANGELS, and MEN IN BLACK: INTERNATIONAL should never have made it as far as the development stage, LITTLE WOMEN is a welcome update to a Hollywood staple. Credit for that goes to Greta Gerwig (WIENER-DOG; MISTRESS AMERICA; MAGGIE’S PLAN; JACKIE; FRANCES HA) who, in her reprise directorial effort after LADY BIRD, breathes new life into this 151-year-old two-volume classic by Louisa May Alcott, creating something that is both old yet very contemporary.

In case you’re uneducated and, if so, I welcome you here, LITTLE WOMEN tells the story of the March family, and in particular their four teenage daughters, Meg, Jo, Beth and Amy, who live in genteel poverty in American Civil War-era Concord, Massachusetts. The story follows the girls, their lives, loves, heartbreaks and joys, as they enter womanhood.

Gerwig’s LITTLE WOMEN is apparently the seventh Hollywood version of the story that has seen stage, TV and animated versions over the years as well. It seems to be the type of story that screenwriters love interpreting for each new generation, and Gerwig is no exception in that regard. She, though, does something different. She starts her story in the middle with Jo (Saoirse Ronan, BROOKLYN; LADY BIRD; MARY QUEEN OF SCOTS) already grown up and living in a boarding house in New York while trying to forge a career as a published writer. The story then flashes back seven years to Concord with Jo writing revenge plays starring her sisters for the neighbourhood children. Throughout the film, the story jumps back and forth in time with Gerwig using parallel incidents to build a picture of how these girls learn and grow from their experiences. To differentiate between the two time periods, the past is filmed in sunny ambers while the present is a palette of faded blues and greys, no doubt reflections of the family’s economic circumstances.

As in the other film versions, characters, events and even dialogue have been tweaked. Here, Gerwig brings Theodore “Laurie” Laurence (Timothée Chalamet, A RAINY DAY IN NEW YORK; BEAUTIFUL BOY; LADY BIRD; CALL ME BY YOUR NAME), the Marches’ wealthy, young neighbour, closer to how Alcott wrote the character. In the book, Amy calls him “Lazy Laurence” and we see evidence of that in his character here. For all you people who think that he and Jo belonged together (that’s not a spoiler at this point), it wouldn’t have worked — certainly not with this Jo at any rate. Gerwig’s Jo has far too much drive for someone as unambitious as her Laurie. Professor Bhaer, on the other hand, seems more like Jo’s type, not that she needs a type. It is believed that Alcott, who never married, preferred to see Jo stay single and that she only married the character off to Bhaer as a concession to her publisher. At least Bhaer, who is a middle-aged German in the book — although being “middle-aged” in 1868 probably meant that you’re 35, is played here by 36-year-old Parisian hottie Louis Garrel (REDOUBTABLE). The age gap between him and Ronan is far less creepy than it was for Winona Ryder and Gabriel Byrne in the 1994 film adaptation.

Performances all around are first-rate with Ronan and Florence Pugh (MIDSOMMAR) as Amy the best of an already fabulous cast that includes Laura Dern (JT LEROY; STAR WARS: THE LAST JEDI; DOWNSIZING; WILD; THE FAULT IN OUR STARS) as Marmee, Tracy Letts (FORD V FERRARI; LADY BIRD; ELVIS & NIXON; WIENER-DOG; THE BIG SHORT) as Jo’s publisher, Meryl Streep (MARY POPPINS RETURNS; the MAMMA MIA! films; FLORENCE FOSTER JENKINS; AUGUST: OSAGE COUNTY) as Aunt March, and Emma Watson (THE CIRCLE; COLONIA; NOAH) as Meg. This has been a great year for Dern as she just won a Golden Globe award for her performance in MARRIAGE STORY. She’s highly likely to win an Oscar for that role too, unless Pugh nabs it, which is a real possibility. At the very least, expect Pugh to get an Oscar nomination.

If there is a shortcoming with the film it’s that some storylines involving Meg and Father March (Bob Odenkirk, BOULEVARD; NEBRASKA; THE SPECTACULAR NOW; TV’s BETTER CALL SAUL and BREAKING BAD) seem a bit rushed, though these are all secondary to the main plot involving Jo, Laurie and Amy. All in all though, Gerwig’s LITTLE WOMEN is a wonderful film and it will surely be a holiday classic for many years to come… at least until the next adaptation comes around.