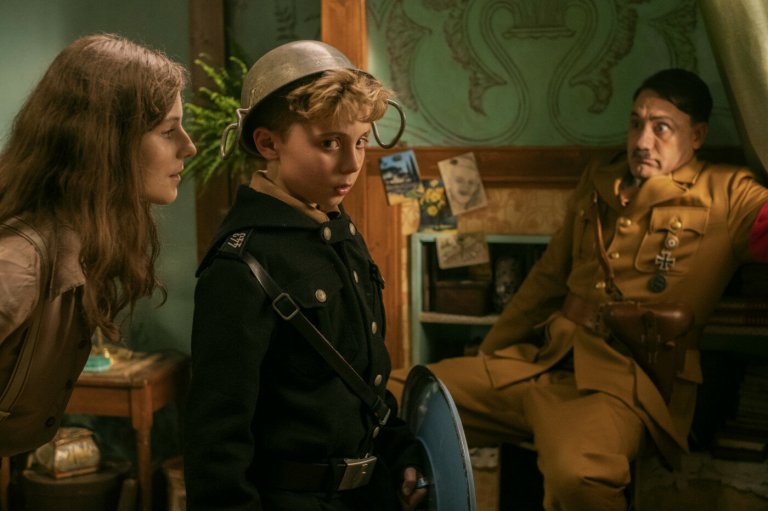 Leave it to Kiwi funnyman Taika Waititi (THOR: RAGNAROK; WHAT WE DO IN THE SHADOWS) to mine humour from one of the darkest chapters in modern history. While JOJO RABBIT certainly has its detractors who feel that when it comes to Hitler, laughing is verboten, for most people seeing the film, they understand that writer-director Waititi’s message is much bigger than just sending up an evil tyrant even if they don’t get all the jokes.

Jojo (Johannes) Betzler (Roman Griffin Davis) is an angelic-looking, 10-year-old who lives with his mother, Rosie (Scarlett Johansson, the AVENGERS franchise; ISLE OF DOGS; GHOST IN THE SHELL; THE JUNGLE BOOK; CHEF; DON JON; HER), in a typical German town. His father has gone off to Italy to fight the Allies and his older sister has died under circumstances that are not discussed. A good little Nazi, Jojo, and his second best friend, Yorki (Archie Yates), have decided to join the local Hitlerjunge and they head off to the nearby forest to learn how to throw mortars and burn books under tutelage of Captain Klenzendorf (Sam Rockwell, RICHARD JEWELL; VICE; THREE BILLBOARDS OUTSIDE EBBING, MISSOURI) and his overly zealous assistants, Fraulein Rahm (Rebel Wilson, THE HUSTLE; ABSOLUTELY FABULOUS (THE MOVIE)) and Finkel (Alfie Allen, JOHN WICK; TV’s GOT). Jojo’s first best friend, Adolf (Waititi) – i.e., THAT Adolf – is there too, but only Jojo can see him. Adolf readily dispenses advice to the impressionable Jojo, though that advice is rarely prudent. It’s on one of those occasions that leaves Jojo injured and gets him transferred to administrative duties in town. One day, he arrives home early and stumbles across Elsa (Thomasin McKenzie, LEAVE NO TRACE), a young Jewish girl whom Rosie is hiding in their crawlspace. Elsa and Jojo agree to an uneasy truce for fear that they would all be arrested and worse if either was to go public with their knowledge of the other. As the two get to know each other, Jojo realises that Jews aren’t even remotely similar to what he has been taught.

To all those who say that making fun of Hitler and the Nazis is taboo because it diminishes their evil and humanises them, I would argue that satirising their lunacy is the way to beat them. I would also say that Hitler and the Nazis were human. They didn’t come to Earth from another planet in the 1920s and then leave at the end of WWII.

Looking at similar films that came before this one – THE GREAT DICTATOR (1940), TO BE OR NOT TO BE (1942) and THE PRODUCERS (1967) – each in its own way said that tolerance and humanity will still be here long after Hitler is gone. Sadly, intolerant people still exist and that’s who Waititi is targeting with this film. To be fair, he doesn’t draw a strong enough line from the events in Nazi Germany to those that are taking place today around the world and there is a chance that people who see this film will only view it through an historical lens. I also would have preferred that his three Nazi youth leaders be less earning of redemption but maybe that’s my cultural bias coming in here. Many critics have also complained that Waititi’s Hitler is too buffoonish but these people have it all wrong. Waititi isn’t playing Hitler. He is playing a 10-year-old boy’s idea of who Hitler could be. Big difference.

That being said, JOJO RABBIT is a hoot. Twelve-year-old Davis and 10-year-old Yates, who are both making their movie debuts here, are fabulous. Davis beat out both Yates and co-star McKenzie to win the Critics’ Choice Movie Award for Best Young Performer a few weeks ago but they are all deserving of accolades. The film is up for six Oscars including Best Picture, Best Supporting Actress (Johansson) and Best Adapted Screenplay (Waititi). I doubt it will win any but that doesn’t mean you shouldn’t see the film. JOJO RABBIT is really a delightful film even if it suffers from a few misfires.