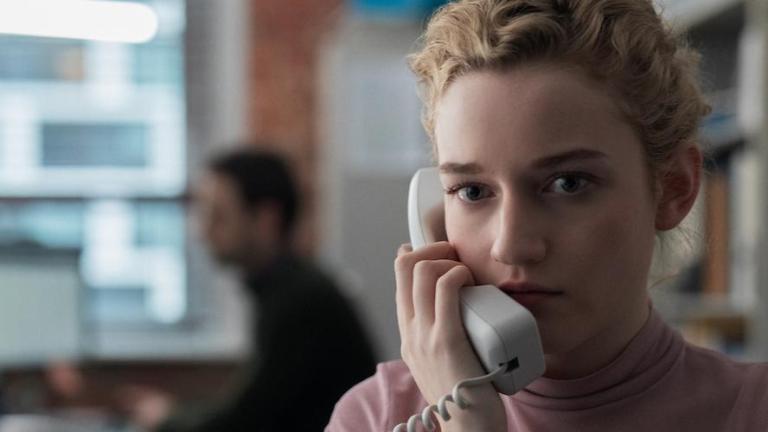 With the recent sentencing of disgraced movie mogul Harvey Weinstein to 23 years in jail (Did that only happen in March? It seems like it was a lifetime ago!), many hoped that the issue of sexual abuse in the workplace was finally given proper redress. The unfortunate reality is that not only does sexual abuse in the workplace still go on, emotional abuse does as well. The new film, THE ASSISTANT, looks at both types of abuse through the eyes of a young woman who not only sees it, she experiences it first-hand.

Jane (Julia Garner, TV’s THE AMERICANS and OZARK) is a recent university graduate who works as a junior assistant to a movie and television producer in Manhattan. While many of us have had nasty first jobs, hers is especially awful. She needs to be in the office each morning before dawn and she’s the last one to leave at night, taking work home with her too. During the day, she’s cleaning up her boss’ office, wiping dubious stains off his casting couch, writing out company cheques to people whose names will be filled in at a later time, and providing alibis to his put-upon wife. When things don’t go well as her boss would have liked, she is forced to send him an email of apology taking responsibility for the snafu. What she’s too young to realise is that he’s creating a paper trail that his lawyers will use to defend him in court should that day of reckoning finally come.

Unlike BOMBSHELL, which shows how former Fox News chairman and CEO Roger Ailes committed sexual abuse in plain view, THE ASSISTANT takes a very different tack. The abuser here remains unseen throughout the film, though his voice can be heard through the phone as he grooms Jane to be his unwitting accomplice by stripping her of her self-worth. What is quite frightening is that when Jane does report her boss’ behaviour to Wilcock (Matthew Macfayden, THE CURRENT WAR; PRIDE & PREJUDICE), the company’s human resources manager, she’s bullied by him as well to let the matter slide for the sake of her future career in the industry.

THE ASSISTANT is written and directed by Melbourne-native Kitty Green, whose previous film credits involve making documentaries (CASTING JONBENET; UKRAINE IS NOT A BROTHEL). The film premiered at the Telluride Film Festival last August and is just now having its commercial release. While critics are almost unanimous in their praise of this film, audiences have been far less complimentary, with many of them complaining about the film’s slow pacing. Yes, you have to have patience with this film because the action only takes place over one day and much of what Jane does is rather mundane. But that’s the point. Like the tide that hits a solid rock day in and day out, eventually that rock breaks down into tiny grains of sand that are powerless against the water. It’s not one instance of her boss’ predatory behaviour that wears Jane down. It’s also the toxic environment he has created, where presumably every other woman in the office has been beaten down into submission/compliance/acceptance as well.

THE ASSISTANT is available for rent on all the major VOD digital platforms. It’s well worth checking out.

Watch the review recorded on Facebook Live on Friday, May 8th, 8:30 am HK time!

3 thoughts on “Movie Review: The Assistant”