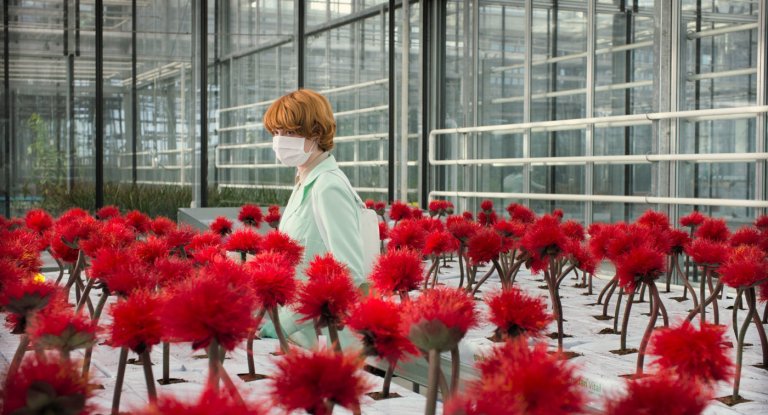 If we Hongkongers have learned anything from this pandemic, it’s how to wear a surgical mask correctly. That simple but highly effective technique seems to be lost on the botanists at Plantlabs, the fictitious British commercial laboratory in the film, LITTLE JOE, that develops new species for the plant-loving world. One plant breeding team there, headed by Alice Woodard (Emily Beecham, DAPHNE) and Chris (Ben Whishaw, the James Bond franchise; MARY POPPINS RETURNS; the PADDINGTON films; A HOLOGRAM FOR THE KING; THE DANISH GIRL; THE LOBSTER), has genetically engineered a new species of flower that releases a scent that reacts with one’s production of oxytocin to impart a feeling of happiness and well-being. However, it slowly becomes apparent to Emily that the plant species has other ideas than just making people feel good. Had the scientists been following generally accepted safe lab protocols, the outcome of the film would have been very different. But that wouldn’t have been a very interesting story, now would it?

Austrian writer-director Jessica Hausner’s (LOURDES; AMOUR FOU) first English-language film is a bit of modern-day INVASION OF THE BODY SNATCHERS but, unfortunately, it doesn’t hold a candle to that earlier sci-fi classic. Instead of an alien plant species coming down to Earth and altering humanity as we know it, “Little Joe”, as the plant is named, is homegrown. LITTLE JOE is clearly a cautionary tale about the perils of engaging in rushed science — and prescient, too, given that the Trump administration is now claiming it has evidence that the SARS-CoV-2 virus was created in a lab in Wuhan, China.

Hausner’s characters are all a curious bunch even before they get spritzed with mind-altering pollen. To call the performances “wooden” would be an understatement but it’s clearly intentional as it makes it harder for the uninfected to be distinguished from the infected. People basically go from being your everyday, bog-standard zombies to being content zombies. Unfortunately, it doesn’t work and the movie’s 106-minute runtime can seem like an eternity. I should qualify that last statement. It didn’t work for me but it evidently worked for the jury at last year’s Cannes Film Festival who bestowed Beecham with its Best Actress award for her performance here. Equally curious is Hausner’s choice of music by Japanese composer Teiji Ito/伊藤貞司, who died in 1982. The heavy use of the shakuhachi and taiko drums is almost as annoying as the barking of dogs that repeatedly punctuates the film’s soundtrack.

If watching a movie about happy zombies is your thing, or maybe you’re a conspiracy theorist who is looking for “evidence” of foul play at a state-sponsored lab, then check this film out. For me, LITTLE JOE simply stinks.

LITTLE JOE is opening in Hong Kong’s cinemas on Thursday, May 14th. It’s also available on the major VOD services.

Watch the review recorded on Facebook Live on Friday, May 15th, 8:30 am HK time!