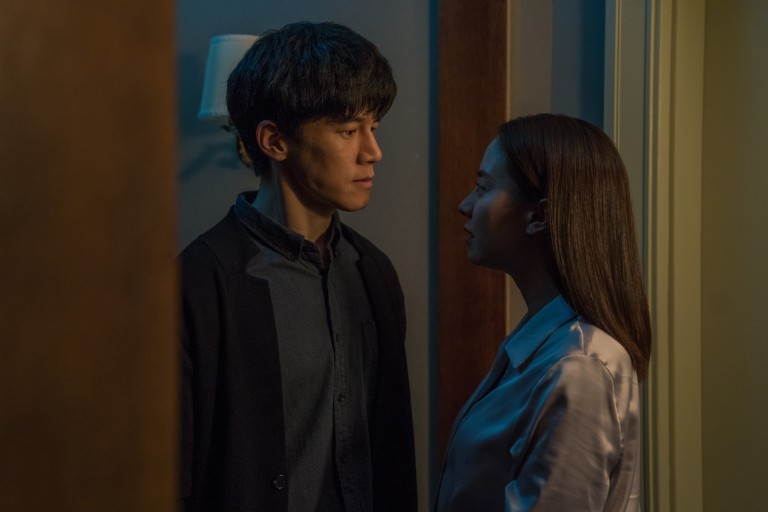 Acclaimed South Korean novelist Sohn Won-pyung/손원평 steps behind the camera for the first time to direct her own mystery-thriller. Unfortunately, what may work on the printed page, doesn’t quite work on the screen.

Seo-jin (Kim Mu-yeol/김무열) is a successful architect and stylish dresser in Seoul. Six months earlier, though, his beloved wife was killed in a mysterious hit-and-run incident. Now he and his six-year-old daughter have moved into his parents’ spacious home while he tries to deal with the loss. All their lives are suddenly upended when a woman (Song Ji-hyo/송지효) shows up claiming to be Seo-jin’s sister Yoo-jin, who went missing 25 years earlier. Yoo-jin quickly asserts her authority in the house, replacing their parents’ staff, and although the parents are quite happy with the changes, Seo-jin is less than convinced that this woman is, in fact, his sister. As he looks into her past, he also begins to suspect that she is somehow involved in his wife’s death.

INTRUDER starts off well enough with both Seo-jin and the audience trying to work out Yoo-jin’s motivation. Is she really his sister? Where has she been for the past 25 years? Why is she so keen on bringing her own people into their parents’ home (now where have we seen that story arc before?) and why are they so accepting of that? Every old person I have ever known has never accepted change without a fight but, strangely, these two are completely game. Even though Seo-jin appears to be a reliable hero, he behaves in the most illogical manner even when the evidence mounts up against Yoo-jin. While she may be his sister, her motives appear to be less than holy. A couple of instances really stand out: The first comes after Seo-jin asks Yoo-jin not to pick his daughter up at her school anymore and she does it anyway. Now the child is behaving strangely. Take the kid out of that situation! What kind of parent are you, man? The second comes with Seo-jin’s phone calls to various people he trusts where he says, “I can’t tell you over the phone. I need to tell you in person.” Really? Is this a soap opera where people have to have face-to-face conversations? I was hoping someone would tell Seo-jin to stop being so effing melodramatic and just spill the beans already but that didn’t happen. Equally ridiculous are the twists and turns that come out of left field. In a film like this, surprises are to be expected by they have to be credible. The ones in INTRUDER are just insane. I’m sure I wasn’t the only one in my audience who groaned.

Even with all its faults, Kim and Song still put in good performances. Unfortunately, they’re let down by this dumpster fire of a story that completely abandons logic and good sense. Unless you’re really bored, you can safely give INTRUDER a miss.