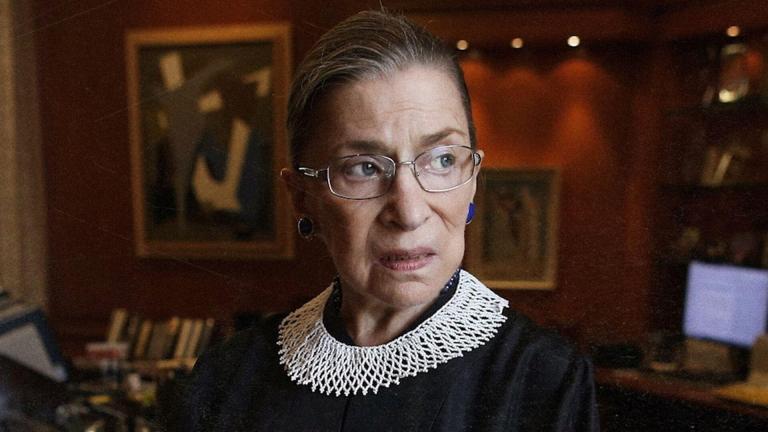 According to Jewish tradition, a person who dies on the eve of the Jewish New Year (Rosh Hashanah) is a tzaddik, someone of great righteousness. It’s fitting, then, that G-d chose this day to be Ruth Bader Ginsburg’s last.

Last week someone in China took exception to one of my reviews, calling me a “Donald Trump supporter”. I’m not sure what one has to do with the other but ouch! The fellow clearly hasn’t read many of my reviews otherwise he’d know that notion couldn’t be further from the truth. Well, my friend in China, if you’re reading this one, you’ll realise that I’m definitely not a fan of The Donald. You see, US Supreme Court Associate Justice Ruth Bader Ginsburg isn’t either and I’m a big fan of hers. It’s no surprise, then, that I absolutely loved RBG, the Oscar-nominated documentary on her remarkable life and career.

In case you missed seeing the recent biopic, ON THE BASIS OF SEX, Justice Ginsburg has been an ardent equal rights advocate for almost 50 years. Before she was appointed to the Supreme Court in 1993 by then President Bill Clinton, she successfully argued five of six cases regarding gender discrimination before that court. Very wisely, one of those cases involved a single father being denied social security benefits because he wasn’t a single mother.

Now in her mid-80s, Ginsburg’s brilliant mind is showing no signs of slowing down even as various cancers ravage her body. Going to the gym three times a week, her personal trainer puts her through paces that would break men and women half her age. (Stephen Colbert did a wonderful segment with her last year. She shamed the 54-year-old with her flexibility and agility.) Meanwhile, in court and on the bench, her words and actions have inspired countless young women to pick up her women’s rights torch and run with it, and some of them are seen in the film singing her praises. In the process, Ginsburg has become a pop culture icon to tens of millions, earning the moniker “Notorious”.

Co-directors Julie Cohen (THE STURGEON QUEENS) and Betsy West (THE LAVENDER SCARE) don’t stray from the typical “talking heads and archival footage” documentary format and their film often comes across like a love letter to Ginsburg but I certainly didn’t mind. The woman is clearly worthy of such adulation. Be prepared to smile throughout as you watch it.

Now that the Supreme Court’s balance of power has shifted to the right with Trump’s two conservative appointments, Ginsburg has no plans to retire as long as a GOP president is sitting in the White House. That means, all being well, RBG will be on the bench until 2021 at the earliest. As you watch the film, it becomes obvious that she is doing everything she can to stay alive and healthy. In the Jewish religion, we wish someone should live to 120. If Ruth Bader Ginsburg lives that long, America will be all the greater for it.

RBG is must-see viewing — even more so now.

Yita Ruchel, daughter of Natan and Tzirel Leah
May her soul be bound up in the bond of life.

Watch the review recorded on Facebook Live on Friday, March 22nd at 8:30 am HK time!