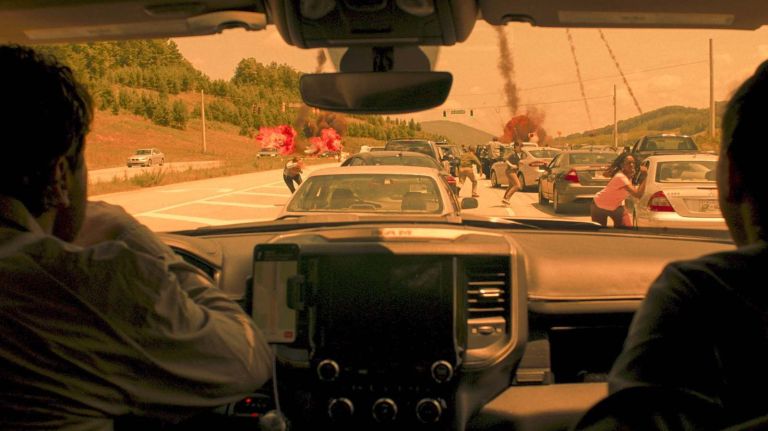 In this year of the Covid-19 pandemic, murder hornets, epic forest fires, locust swarms and zombie hurricanes, I suppose it’s only natural that we should get a film about a gigantic comet hurtling to Earth potentially causing an extinction-level event. Welcome to GREENLAND.

John Garrity (Gerard Butler, A FAMILY MAN; the …HAS FALLEN series) is a structural engineer based in Atlanta. Estranged from his wife, Allison (Morena Baccarin, the DEADPOOL films, TV’s HOMELAND), and their 7-year-old son, Nathan (Roger Dale Floyd, DOCTOR SLEEP), he comes home just in time to witness the arrival of Clarke, a mother-of-all-comets from another solar system, during Nathan’s comet-watching party. But it turns out that the scientists are terribly wrong about Clarke’s trajectory and behaviour once it hits our atmosphere, especially when its first chunk of firy ice and rock incinerates all of central Florida in one go. At the same time, John receives an emergency alert on his phone that he and his family are required to report to the nearby air base ASAP. Now, with hell raining down on everyone and everything, and chaos and looting all around, John must get his family on a chartered plane that is rumoured to be flying to Greenland where the US government has underground bunkers set up to protect only those it deems worth saving from this cataclysm.

Yes, we’ve pretty much seen this before — in 1998 with DEEP IMPACT and ARMAGEDDON — but this time there’s no Robert Duvall or Bruce Willis to save humanity. The best John Garrity can do is barely save his family and pull a stranger out of a car that just got fireballed by a piece of the comet. What GREENLAND does offer is almost two hours of Butler and Baccarin screaming at people for various reasons and Floyd crying.

Now, I’m no scientist… well, not professionally, at any rate, but don’t comets follow elliptical trajectories around the sun? What’s a comet doing crashing into Earth? An asteroid, sure, but a comet? It was clear from the film’s final scene that governments around the world knew well ahead of time that the comet was going to lay waste to the planet. You’d think a whistleblower would have come forth at some point and told someone. Even more incredible was that no one seemed to mind that they were lied to. And let’s be honest, given the US government’s response to Hurricane Katrina and the Covid-19 pandemic, are we really supposed to believe that it can get its act together in time for this disaster? And what about that “lottery” that selected the Garritys for survival? It’s assumed in the movie that he was chosen because of his profession. Looking at how the planet looked post-apocalypse, I would think that the planet would need farmers (don’t get me started on how saltwater droplets in the air would kill off any vegetation and wildlife) and other labourers long before it would need a structural engineer. With a huge percentage of the population wiped out, how many tall buildings are they going to need?

But that’s not even the worst of this hot mess of a film. The Garritys finally make it into that bunker (not a big spoiler) and the emerge nine months later. The story just skips over that time period as if nothing of consequence happened. Really? I’ve been social distancing for nine months and I’m about ready to kill anyone who pisses me off even slightly, not to mention that I’ve put on about ten pounds of covid weight during this time due to my inactivity. When the doors to the bunker opened, the Garritys looked like they had just come from a weekend at a spa.

I don’t think anyone expected GREENLAND to be a good film. I suppose if you go into the cinema with that expectation, you won’t be disappointed.