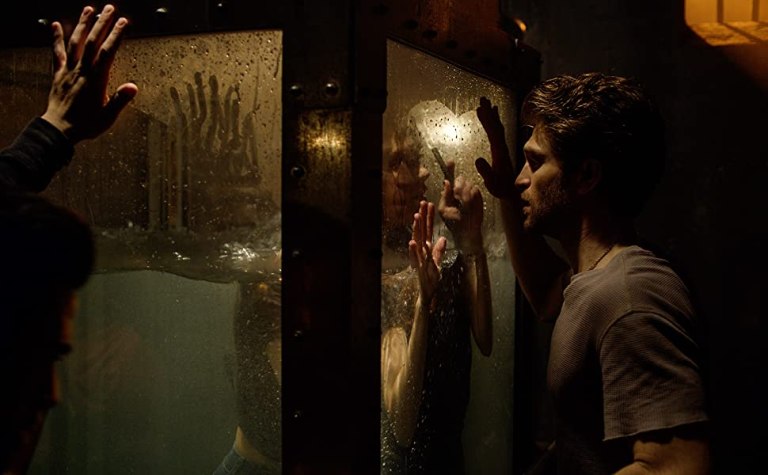 Although our cinemas are open, finding anything decent to put on their screens this far into the pandemic is proving to be the ultimate challenge. It’s beginning to look like if the studios can hold on to a film, they will. Otherwise, even if a film is halfway worth watching, it goes to one of the streaming services. That leaves the cinemas with films that would normally have gone direct to DVD. FOLLOW ME, which is known as NO ESCAPE in some markets, is one of those films that falls into that last group.

Cole (Keegan Allen, TV’s PRETTY LITTLE LIARS) is a very successful vlogger in the vein of Logan Paul who has built a following of millions of fans around the world who watch his adrenaline-charged exploits on his video channel. For his channel’s tenth anniversary, his best friend, Dash (George Janko), decides to organize a special trip to Moscow for Cole. There, Dash’s old and mega rich friend, Alexei (Ronen Rubinstein, TV’s 9-1-1: LONE STAR) has built a private escape room like no other. Coming along for the experience are Cole’s friends, Thomas (Denzel Whitaker, BLACK PANTHER) and Sam (rapper Siya), and Cole’s girlfriend, Erin (Holland Roden, TV’s TEEN WOLF). Once in Moscow, the Americans are blown away by Alexei’s first-class treatment but their mood quickly changes once inside Alexei’s escape room located deep within a former KGB prison. No sooner do Cole and his friends solve the puzzles and barely get out alive then the game takes a really deadly turn.

FOLLOW ME is not only highly reminiscent of the 2017 film, ESCAPE ROOM, it even contains footage from that film. Don’t be too surprised by that, though, because both films are written, directed and produced by Will Wernick. But that’s not where the similarity ends. FOLLOW ME also rips off elements of HOSTEL (2005), SAW (2004) and even a certain long-running reality TV show that will go unnamed because that would be a spoiler.

Lovers of blood and gore will salivate over this film with plenty of both on view as Cole and friends make their way through Alexei’s chamber of horrors. However, even the most sadistic among us will find FOLLOW ME a slog with its slow pacing. For a film that clocks in at just over 90 minutes, FOLLOW ME wears thin early on as audiences are subjected to scene after scene of Cole gaping in fear and incredulity as his friends are picked off one by one. The film may have been more interesting if he had peed in his pants but no such luck.

Just as I said with THE DOORMAN, which also opened here this week, in a pre-pandemic world, FOLLOW ME would have gone directly to DVD. Even so, there is a market for shlock like this film. FOLLOW ME is only for the desperate or those who take long distance buses in third-world countries.