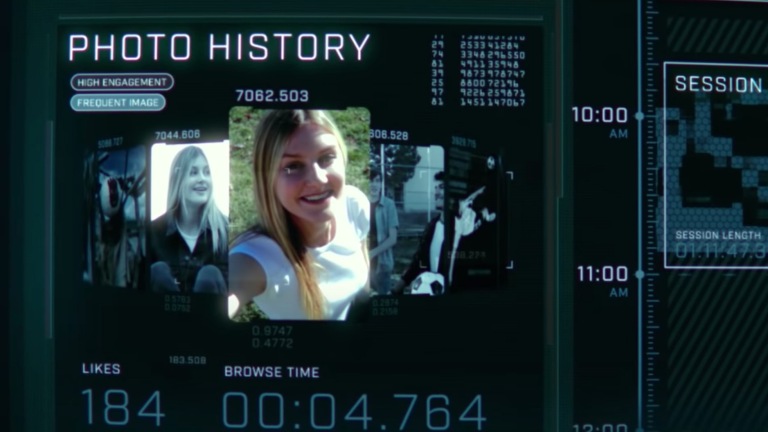 I have a friend whom I consider to be fairly intelligent and well grounded yet every few days she reposts some batsh*t crazy conspiracy theory or fake news story on her Facebook feed. When I see that, I think to myself, here’s a reasonably sane person who actually believes that Covid-19 is a hoax, or Hillary Clinton is running a satanic pedophile ring out of the basement of a pizzeria in Washington, DC, or wind turbines cause cancer, or Sleepy Joe Biden takes performance-enhancing drugs or [fill in the blank]. How does that even happen? Once you watch THE SOCIAL DILEMMA, you’ll understand.

THE SOCIAL DILEMMA tells us something that many of us have suspected for a long time: The social media companies are shaping our opinions. Filmmaker Joel Orlowski (CHASING CORAL; CHASING ICE) interviews a number of former executives from Silicon Valley’s biggest names and the picture they paint is not pretty. Companies like Google, Facebook, Twitter, Apple, Microsoft and Amazon are hard at work keeping your eyes glued to their sites for as long as possible. The one with the best algorithm to achieve that will earn billions of dollars through advertising. If you’re thinking that you never buy anything that’s advertised on Facebook or YouTube, you’re fooling yourself. You may not be buying that product or service today but with the idea put into your head, you may one day soon or you may mention it to a friend. That’s worth something to advertisers too.

But that’s not even the most insidious part of their activities. Going back to my aforementioned friend, I used to wonder how she even comes across these conspiracy theories to post. They don’t show up in my Facebook feed so why are they showing up in hers? The answer again is the algorithm. Based on what she’s clicked on in the past or even how long her screen has rested on a particular image, the algorithm assumes that this is a subject that interests her and so it gives her more of the same. Critics of social media say that it’s like giving drugs to a drug addict and their analogy is not wrong, say the people in the film. According to them, the longer you stay on a particular social media site, the more it can learn about you, and the more it learns about you, the more valuable that information is to advertisers. To do that, it’s going to feed your hunger. For many people, their social media page is their prime, if not only, source of news and information. If all you’re seeing is story after story about how vaccines cause autism, you’re going to start believing that it must be true. But maybe you think you’re smarter than this. Maybe you get your news from credible sources that give you a balanced and informed viewpoint. Unfortunately, the social media giants have got you figured out regardless. There’s a reason why Facebook bought WhatsApp, Microsoft bought Skype, Amazon is pushing Alexa, Apple is pushing Siri and Google tracks pretty much everything you do and say, and everywhere you go on your Android-powered mobile device. With every keystroke, every spoken word and every location you visit, they are learning something about you.

If it all sounds pretty bleak, Jaron Lanier, one of the film’s subject matter experts, has a solution: Get off social media. Stop being what he calls “the product”. Easier said than done. Not surprisingly, Facebook has pushed back against the points raised in the film, saying it “gives a distorted view of how social media platforms work to create a convenient scapegoat for what are difficult and complex societal problems.” Sorry, Mark, we just don’t believe you. The problem is, though, we’re already hooked on your drug and we want more.

THE SOCIAL DILEMMA is streaming now on Netflix. Watch it and you may just think twice the next time you’re about to click on that social media app you love so much.