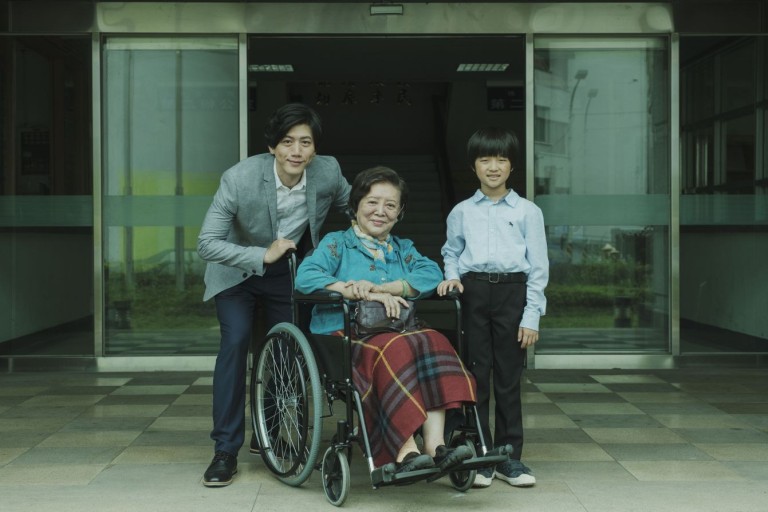 In May 2019, Taiwan became the first country in Asia to legalize same-sex marriage. (Don’t bother arguing with me about whether Taiwan is a country or not. I won’t go there.) While that is a momentous ruling for this very traditional part of the world, gay rights activists in Taiwan still have further to go before they get real equality under the law. Same-sex couples are still unable to legally adopt children. This subject forms the backdrop to the Taiwanese film, DEAR TENANT… sort of.

For the past five years, Lin Chien-yi (Mo Tzu-yi/莫子儀) has been looking after his elderly landlady, Mrs. Chou (Chen Shu-fang/陳淑芳), and her nine-year-old grandson, Yo-yu (Pai Run-yin/白潤音), at her modest flat in Kaohsiung’s port district. As we come to learn through flashbacks, Lin was the partner of Chou’s son and Yo-yu’s father, Li-wei, who passed away five years earlier. After the old lady passes away from late stage diabetes, her ne’er-do-well son, Li-gang (Jay Shih/是元介, TURN AROUND), returns from China expecting to inherit her flat. He’s surprised to learn that Mrs. Chou not only left the flat to little Yo-yu, the boy has also been legally adopted by Chien-yi. Li-gang contacts the police, accusing Chien-yi of killing his mother and, as the police investigate, evidence begins to mount against Chien-yi.

While writer-director Cheng Yu-chieh (鄭有傑) has created the makings of a decent procedural drama, he takes the story on a different tack, slowly (sometimes painfully slowly) revealing how Chien-yi came to adopting Yo-yu and how Mrs. Chou died so suddenly. Unfortunately, it doesn’t gibe with the reality of the situation in Taiwan today though. Kaohsiung, and its police force in particular, is portrayed as being very provincial, looking down on gay people and how they choose to live their lives, while at the same time accepting that a gay man can legally adopt a child who is not biologically his. The adoption issue is all the more unbelievable as Yo-yu’s mother is very much alive and even the most liberal of judges would certainly grant her custody over Chien-yi. Even if she would be deemed unfit to care for the boy, and we’re given no indication that this is the case, Chien-yi would not be allowed to adopt the child.

Story problems aside, Cheng gets good performances out of his cast, particularly Mo, who portrays Chien-yi as a tender lover, devoted friend, committed caregiver and caring father. The actor took home the Best Actor award at the Taipei Film Festival in July. Although the director throws in a couple of plot twists late in the story, one that is clearly visible a mile away and the other out of left field, DEAR TENANT is still an interesting tale of unconditional love in a non-traditional family.

DEAR TENANT is playing now in Hong Kong’s cinemas. The film is up for six awards at the Golden Horse Awards, which will take place on November 21st. Even with its improbable premise, it’s still worth checking out.