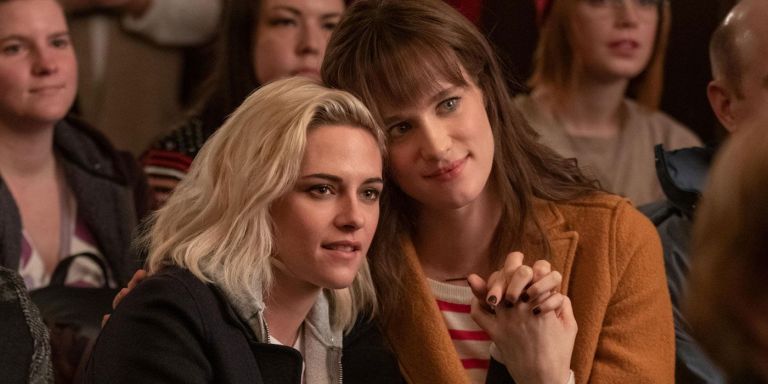 I get that the LGBTQ+ community wants to see more representation in Hollywood films and I’m all for it. It’s not surprising, then, that so many people are excited about Hulu’s new Xmas film where two lesbians are front and center in the story. But is it deserving of all the hoopla it’s receiving?

In HAPPIEST SEASON, PhD student Abby (Kristen Stewart, UNDERWATER; CHARLIE’S ANGELS; JT LEROY; BILLY LYNN’S LONG HALF-TIME WALK; PERSONAL SHOPPER; CAFÉ SOCIETY; STILL ALICE) is in a happy relationship with Harper (Mackenzie Davis, TERMINATOR: DARK FATE; TULLY; BLADE RUNNER 2049; THE MARTIAN), a reporter for a large Pittsburgh newspaper. With Xmas around the corner, Harper invites Abby to join her as she goes to her family’s home for the holidays. The only problem with that idea is that Harper has never told her uptight parents, Tipper (Mary Steenburgen, BACK TO THE FUTURE PART III) and Ted (Victor Garber, TV’s ALIAS), and her über-competitive sisters, Sloane (Alison Brie, THE RENTAL; THE DISASTER ARTIST; A FAMILY MAN; TV’s GLOW, COMMUNITY and MAD MEN) and Jane (film co-writer Mary Holland, TV’s VEEP), that she’s gay. Even worse, she doesn’t let Abby know that she’s still in the closet until they’re too close to her parents’ home for Abby to back out. Complicating matters further, Ted, who is a councilman, is hoping to kick off his campaign for mayor of their Norman Rockwell-ish town and the pressure is on Harper not to create a scandal. (Hello, Harper! Your sister is married to a [gasp!] Black man! I think your dad may be used to scandal by now.) Needless to say, the combination of the holidays, family, politics and Harper’s old flames who show up, all put a huge strain on her relationship with Abby.

Hooray for Hollywood for backing a holiday film where the gay characters are real people who do a lot of on-screen kissing but why did HAPPIEST SEASON have to be such a vanilla story? (I may have written the same thing last year about LOVE, SIMON but at least that film was targeted to a young audience.) Many will argue that baby steps are better than no steps at all and perhaps they’re right, but next year can we please have an LGBTQ+ holiday film where the story isn’t about a 30-something year-old, successful woman who is afraid to come out to her family? This isn’t 1990, after all. As Abby’s BGF John (Dan Levy, TV’s SCHITT’S CREEK) tells her, everyone’s coming out journey is different so perhaps director and co-writer Clea DuVall (TV’s VEEP) had given some thought as to what the major studios would go for in 2020. For me, I would have written a very different story that nixes the Abby character altogether (sorry, K-Stew) and instead involves Harper reuniting with Riley (Aubrey Plaza, CHILD’S PLAY; TV’s PARKS AND RECREATION), her secret flame that she wronged many years before. Unfortunately, in HAPPIEST SEASON, Riley is a miserable lesbian who is living a lonely life. Doesn’t she deserve some happiness too?

Given what we’re given, though, HAPPIEST SEASON is no worse than 98 percent of the other Xmas romcoms we are subjected to at this time every year. I dare say that it’s a damn sight better than last year’s insipid LAST CHRISTMAS. At least HAPPIEST SEASON has Levy and Plaza in it. I’d pay money to see the two of them in a film anytime.