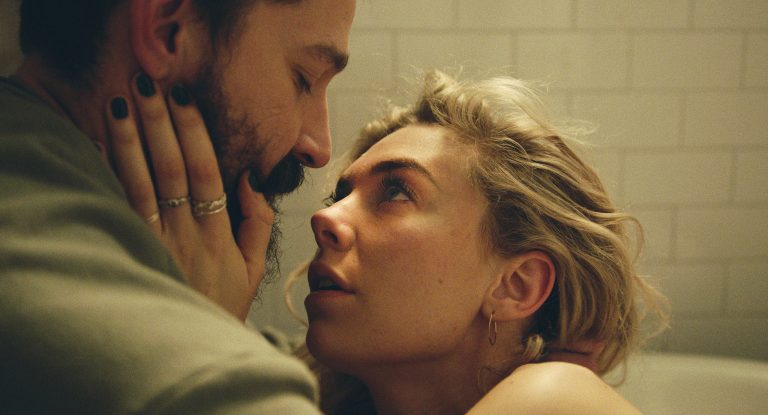 How does one deal with an unspeakable tragedy? Hungarian director Kornél Mundruczó (JUPITER’S MOON) looks at how different members of one family process their grief in his new film, PIECES OF A WOMAN, which is based on a stageplay of the same name by his wife, Kata Wéber, and based on the couple’s own experience.

Martha Weiss (Vanessa Kirby, the MISSION: IMPOSSIBLE films; MR. JONES; ME BEFORE YOU; CHARLIE COUNTRYMAN; TV’s THE CROWN) is an executive with a corner office in Boston. She’s also nine months pregnant with a child with her partner, Sean Carson (Shia LaBeouf, THE TAX COLLECTOR; THE PEANUT BUTTER FALCON; HONEY BOY; CHARLIE COUNTRYMAN), who works as a construction foreman on a pedestrian bridge that is being built presumably across the Charles River. (It’s actually the St. Lawrence River in Montreal, as anyone who has ever been to either city would notice.) The couple’s joy quickly turns to anguish, though, when the infant dies in Martha’s arms moments after being born. Martha’s reaction is to put the episode behind her as quickly as possible and move on with her life. Sean, who can’t stop Martha from pulling away from him, falls back on his old habits. Martha’s mother, Elizabeth (Oscar® winner, 88-year-old Ellen Burstyn, ALICE DOESN’T LIVE HERE ANYMORE; THE EXORCIST; THE LAST PICTURE SHOW), wants justice for her first granddaughter and she takes it upon herself to hire her niece, Suzanne (Sarah Snook, AN AMERICAN PICKLE; THE GLASS CASTLE; THE DRESSMAKER; HOLDING THE MAN), to sue their midwife, Eva (Molly Parker, DEADWOOD: THE MOVIE; TV’s DEADWOOD and HOUSE OF CARDS), for gross incompetence and manslaughter. As the months go by and the bridge continues to be built, the family unit falls apart.

PIECES OF A WOMAN’s first act is fabulous with a 23-minute childbirth scene that was filmed in one cut. (Mundruczó apparently shot the extended scene six times and what we see on the screen was the fourth take.) The camera follows the couple around their living room, hallway, bathroom, bedroom and even out onto the street, as they deal with a home birth that should have been routine but sadly turns out to be anything but. It’s a masterclass in directing but, disappointingly, Mundruczó can’t maintain the intensity and the rest of the film crashes and burns. There is so much that is just plain clumsy, from the noticeable lack of Boston accents (were Mark Wahlberg, Matt Damon, Chris Evans and Ben Affleck all unavailable?) to the ending that feels like an afterthought seemingly created to give the audience hope after watching a very bleak story, and to the head-scratching wrinkle that the Weisses are Jewish. I believe Mundruczó is Jewish (maybe Wéber is too, I don’t know) but the fact that the Weisses are Members of the Tribe is inconsequential. Late in the film’s second act we learn that Elizabeth is a Holocaust survivor but, for some strange reason, she doesn’t mention the “H” word in her big speech to Martha. If you’re going to make a point that a character survived the Holocaust, then say so! Strangely, in an interview, Mundruczó called Martha a third-generation survivor but he’s got it wrong. Just because Elizabeth wasn’t sent to a concentration camp doesn’t make her any less of a Holocaust survivor. Even stranger is the war of wills that the two women have over the infant’s body. Elizabeth wants her buried with a gravestone while Martha wants her cremated but neither of them is following standard practices according to the Jewish religion. Jews typically don’t place an inscribed headstone on graves for children that die before 30 days after birth. They don’t cremate either. That’s not to say that neither happens but they’re the rare exception rather than the rule. Wéber should have consulted with a qualified rabbi.

Throughout the film Mundruczó keeps returning to the bridge Sean is building as the months pass. If the bridge is supposed to be a metaphor for the personal bridge that Sean is building to reach out to Martha and her family, it’s a lame one. We don’t see that he tries very hard, and instead plays the victim card by telling Elizabeth that she doesn’t like him because he is low class and a boor. Perhaps Sean does come from humbler roots than Martha but he’s done quite well for himself as an adult – certainly better than Martha’s brother-in-law, Chris (Benny Safdie, co-director of UNCUT GEMS and GOOD TIME), who leases cars for a living and plays in a church band. Maybe Sean is onto something there though. Perhaps Elizabeth doesn’t like Sean but, if that’s the case, it’s probably because he’s not Jewish. The story can’t go there though because why would she approve of Chris but not Sean?

There are plenty more story problems than just these but I’ll leave it there. PIECES OF A WOMAN is available now on Netflix. Expect an Oscar nomination for Kirby, who picked up the Volpi Cup for Best Actress at last September’s Venice International Film Festival, but nothing more for this muddled film.

3 thoughts on “Movie Review: Pieces of a Woman”