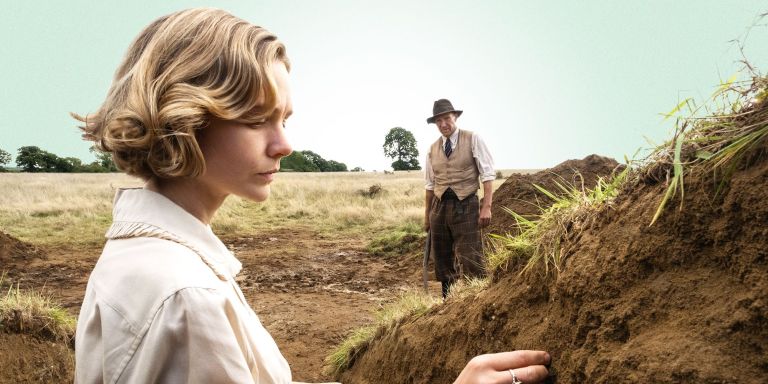 While Shonda Rhimes has just shown the world that Americans can make high quality period dramas too, it’s still the British who do it like no other. The latest UK entry in this genre is THE DIG, which tells the story (sort of) of the discovery of the Sutton Hoo artefacts.

It’s the spring of 1939 and the possibility of war with Germany is the talk on the wireless. In rural Suffolk, however, the people’s thoughts are more local. Woodbridge resident, widow and mother Edith Pretty (Carrie Mulligan, PROMISING YOUNG WOMAN; WILDLIFE) has hired the humble Basil Brown (Ralph Fiennes, OFFICIAL SECRETS; SPECTRE; the HARRY POTTER franchise), a self-taught archaeologist, to dig up some large mounds on her estate. Brown believes that these mounds date from the Anglo-Saxon period (5th to 8th century) period rather than the more common Viking Era (8th to 11 century). His instincts prove right when he uncovers the hull of a massive burial ship. When news of the find gets out, Cambridge University archaeologist Charles Phillips (Ken Stott, CAFÉ SOCIETY; THE HOBBIT trilogy) arrives, declares the site to be of national importance and takes over the dig, bringing in his own people including husband and wife archeologists Stuart (Ben Chaplin, THE LEGEND OF TARZAN) and Peggy Piggott (Lily James, REBECCA; YESTERDAY; MAMMA MIA! HERE WE GO AGAIN; DARKEST HOUR; BABY DRIVER; TV’s DOWNTON ABBEY). That sets him up on a collision course with Pretty, who doesn’t want to see Brown shunted aside. There’s also the question of who owns the artefacts that everyone has to deal with. Meanwhile, as the winds of war blow stronger, two people find they have more in common than just an archeological dig.

THE DIG ticks all the boxes for British period dramas – fine performances, an idyllic location, a large house, meticulous set and costume design, authentic accents (which is no small feat in the UK where accents can vary just by crossing the street), and a story that includes illness and aristocratic privilege. While it’s jolly good entertainment, it’s not brilliant and that may be due to the story itself rather than the directing (by Simon Stone in his sophomore effort) or the acting. It’s about archaeologists, after all, which, unless you’re Indiana Jones, is not the most exciting of occupations. To spice up the story, Moira Buffini (JANE EYRE), who adapted the screenplay from 2007 book of the same name by John Preston (who is the nephew of Peggy Piggott), throws in some late 20th century sensibility with Peggy getting miffed to learn that she was only hired because she’s a 90 lb. woman and, at her weight, she won’t break anything. Peggy also comes to realise that her marriage isn’t all it appears to be and decides to do something about it with Edith’s cousin Rory Lomax (Johnny Flynn, STARDUST), who is one of the film’s few fictional characters. Perhaps the real Peggy was that liberated but we do know that she was an accomplished archaeologist in her own right. Buffini plays it safe, though, by saying that the story is only based on actual events.

THE DIG is available now on Netflix. Certainly check it out. It’s worth watching even if it doesn’t try to be completely accurate. It probably won’t win any major awards either.

One thought on “Movie Review: The Dig”