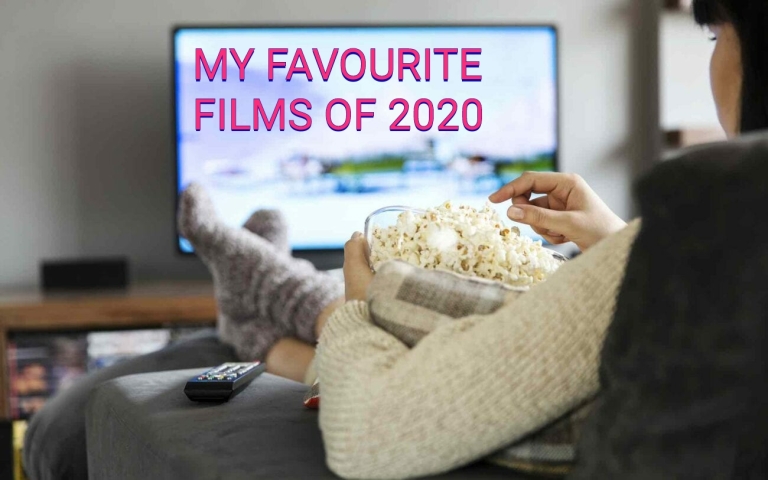 As I’ve written and talked about a few times this past year, thanks to the pandemic, AMPAS, the organisation behind the Academy Awards, has changed the rules on what qualifies as a 2020 film. Because of that, we’ve been seeing Oscar-qualifying films being released right up to February 28th. There are still a few out there that I haven’t seen (like THE FATHER and the Romanian film, COLLECTIVE), both of which are awards contenders, so I’m not able to consider them for this list, but based on the 200-odd films that I did see over the past 14 months, I have come up with my list of favourites. I’m not saying that these are the best films of the year. I’m saying that I enjoyed or appreciated them the most. So, without further ado, here goes:

A slow burning film from director Kelly Reichardt who, along with Chloé Zhou (NOMADLAND), is making a name for herself as a neo-Western filmmaker. After a brief modern-day introduction, FIRST COW jumps back 200 years in time to the Oregon Territory where an unassuming cook teams up with a Chinese immigrant to pursue their American dream. And yes, it involves a cow. Along with assured performances by the film’s two leads, FIRST COW has a strong sense of place with a bunch of ragtag characters who would seem very much at home in an episode of TV’s DEADWOOD.

Another slow burning (uh oh, I see a pattern emerging) but powerful film, NEVER RARELY SOMETIMES ALWAYS tells the story of a 17-year-old who has to navigate through the minefield of government regulations and religious interference that a woman in America must face when she has an unwanted pregnancy. Newcomer Sidney Flanigan, who looks like Saoirse Ronan, is impressive here, especially in the scene that gives the film its title.

It’s almost a given that Disney-Pixar’s SOUL is going to take home the Oscar for Best Animated Feature but don’t let that stop you from see this absolutely delightful film from Ireland. WOLFWALKERS tells the story of a young girl who fancies herself a wolfslayer, like her father. It’s on her first real encounter with wolves that she meets the feral Mebh Óg MacTíre, a young girl who lives in the forest with the canines. Mebh, we learn, is one of those mythical wolf walkers and the two girls decide to team up to stop the Lord Protector from ridding the neighbouring forest of wolves. I couldn’t stop smiling as I watched this film. Between the enchanting story and the wonderfully ornate and textured animation, I became a believer.

Highly entertaining and extremely educational, not just for what happened in Chicago in 1968 and what’s happening in other American cities today, but also for what has happened and is continuing to happen in other cities around the world where the right to protest is being stifled often with brutal consequences (including two places that are near and dear to my heart), THE TRIAL OF THE CHICAGO 7 is, by and large, a winner. The film does lose points, though, with its inaccurate portrayal prosecuting attorney Richard Schultz. Schultz himself said that he had no qualms about his role in the trial. He was not sympathetic to the activists at all and his reputation as the government’s “pit bull” was well earned. Writer-director Aaron Sorkin also fails to mention in the film’s epilogue that US attorney-general John Mitchell, the man who brought these men to court in the first place, was later sent to prison for his role in the 1972 Watergate affair. Hollywood, however, won’t care, and the film will certainly garner a few Oscar nominations.

Another powerful story, this time by first-time feature director Darius Marder, who also co-wrote the screenplay along with his brother Abraham, about a drummer and reformed drug addict who, after losing his hearing, must find new path for himself. Surprisingly, for a movie about a musician, SOUND OF METAL has almost no score. Sound editor Nicolas Becker instead created a soundscape that immerses the audience into the musician’s world. We hear what he hears — muffled, distorted or sometimes nothing at all. The pairing makes us understand his frustrations and choices all the more. Riz Ahmed puts in a great performance, one that is worthy of an Oscar nomination.

Wickedly funny, in a revenge thriller way, Carrie Mulligan gives what may be her best on screen performance yet as Cassandra, a deeply troubled woman who has built a wall between her two personas as a coping mechanism for an event that shattered her life. It’s when that wall starts crumbling that the story gets really interesting. I wouldn’t be surprised to see Mulligan nab an Oscar nomination for her performance here. She’s perfect.

Writer-director Charlie Kaufman’s films are not to everyone’s taste. They require you to sit up and pay attention. I love films that make me think and that’s why this film, which audiences pretty much either ignored or hated, is so high up on my list. If you are going to watch I’M THINKING OF ENDING THINGS, I would suggest you either watch OKLAHOMA! (the 1999 version is the one you need to watch for “Lonely Room”, although I think the 1956 version is the better production) or read the Wikipedia plot synopsis of the play first. This movie will make a whole lot more sense if you do. And you need to have a lot of patience.

In her feature directorial debut, Radha Blank nails it, giving audiences a thoroughly entertaining ride into the state of mind and life of a single black woman who is facing a mid-life crisis. In a perfect world, she’d get an Oscar nomination for Best Original Screenplay.

A tour de force by recent Golden Globe winner Chadwick Boseman, who is a shoo-in for the Best Actor in a Supporting Role Oscar as well. But as fabulous as Boseman is here, so too is his co-star Viola Davis. She’ll probably get an Oscar nod for Best Actress and I hope she wins.

1. Judas and the Black Messiah

Recent Golden Globe winner Daniel Kaluuya is positively mesmerizing and is just as charismatic as Fred Hampton, the character he plays. The big question is whether he or his co-star LaKeith Stanfield will be nominated for the Best Actor Oscar. If Kaluuya will have to go up against the late Chadwick Boseman, he’ll lose. In any case, this is a fabulous film and is deserving of the Best Picture Oscar.

Another Round (Druk) – While many have found the film’s closing scene to be exuberant, I found it rather sad at the same time because the protagonist makes a choice that may not be in his best interests in the long term. Happiness found at the bottom of a bottle is never long-lasting. Ask any reformed alcoholic or anyone in their family. No matter what I think, the film is a strong contender for the Best International Feature Film Oscar.

The Assistant – It’s not often that we see a film that says so little yet says so much. I’ll concede that this film is slow going but its approach to the issue of sexual and emotional abuse in the workplace is powerful.

Borat Subsequent Moviefilm – Whether you find the film “very nice” or just a bunch of hooey from another left-wing Hollywood elite will depend on your political bent and on how much of a Sacha Baron Cohen fan you are. Watching Rudy put his hand down his pants, though, is worth the price of admission.

Mank – Stylish, yes; boring, navel-gazing; yes. Hollywood loves films about Hollywood so it will probably get a few Oscar nominations but it won’t win anything. Amanda Seyfried’s performance is probably the best thing about the film.

Minari – Heartfelt for sure, MINARI is unfortunately getting more press for the Golden Globe controversy than it is for film itself. It will be interesting to see how AMPAS classifies the film for the Oscars. I have a feeling it will get a Best Picture nomination because they will want to show the world how they’re now embracing diversity. Whatever happens, I would like to see Korean screen legend Youn Yuh-jung/윤여정 get a Best Actress in a Supporting Role nomination.

Nomadland – I know it will garner more than a few Oscar nods and awards because the Academy loves stories like this but sorry, I wasn’t overly impressed. Yes, it’s good and its star Frances McDormand carries the film, but is it Oscar-worthy? Nah.

One Night in Miami – Oscar winner Regina King may cop a well-deserved Oscar nomination with this film, her feature directorial debut. Even with strong performances by the film’s four leads, ONE NIGHT IN MIAMI loses a point for being a bit too stagey. This would have been the 11th film on my list.

Pieces of a Woman – Ah, if only Hungarian director Kornél Mundruczó could have maintained the momentum of the film’s first 23 minutes throughout, PIECES OF A WOMAN would be a shoo-in for the Best Picture Oscar. As it is, though, the film’s star, Vanessa Kirby, may get an Oscar nomination out of it.

Soul – Call me a cynic. I wasn’t impressed but, then again, I wasn’t bowled over by INSIDE OUT either. Nevertheless, it will probably take home the Best Animated Feature Oscar and may win for Best Original Score too.

The United States vs. Billie Holiday – It’s this year’s THE WIFE or JUDY – a great starring performance in a dull movie. Yes, Andra Day is excellent but her Golden Globe win was a fluke. The rest of the film is pretty disappointing.

Do you agree or disagree with my choices? What are some of your favourite films from 2020? Let me know!

Watch my review of this week’s movie releases recorded on Facebook Live on Friday, March 12th at 8:30 am HK time!
Don’t be a lurker! If you liked what you just read, here are some suggestions: