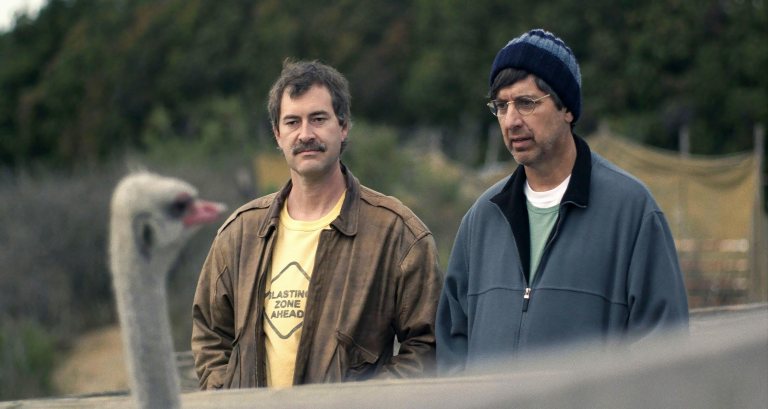 Assisted suicide is normally not a subject that would appeal to most moviegoers but when one character is played by Ray Romano, you can safely assume that PADDLETON won’t be your run-of-the-mill tearjerker.

Michael (Mark Duplass, TULLY; BLUE JAY) and Andy (Romano, THE BIG SICK; TV’s EVERYBODY LOVES RAYMOND) are the best of friends. The single, middle-aged guys who are also neighbours, are seemingly cut from the same piece of cloth. While neither is good at making small talk or eye contact, the pair shares a love of kung fu movies, jigsaw puzzles, homemade pizza and paddleton, a game they invented and play often. After Michael is diagnosed with terminal cancer, he decides that he wants to die on his own terms. Although Andy doesn’t like Michael’s plan, he agrees to accompany his pal on a road trip to a California town where Michael knows he can get the prescription for the lethal cocktail of drugs he needs filled. As Michael struggles with his illness and knowing when the right time to die is, Andy struggles with the imminent prospect that he is going to lose his BFF.

PADDLETON is a wonderful character study of two loners who were lucky enough to find each other. Theirs is a friendship so pure that in today’s light their relationship can easily be misconstrued as being homosexual, as other characters in the story assume. But they’re not gay; they’re just soul mates, and if they didn’t have each other, they’d probably have no one. That’s evidently what’s on Andy’s mind once Michael has his drugs.

Although the film’s pace is on the slow side and the dialogue is sparse — neither Michael nor Andy are great talkers, after all — the pauses give viewers time to bathe in their characters. Duplass, who wrote the screenplay along with director Alex Lehmann (BLUE JAY), has said that they pretty much worked off an outline, shooting mostly in sequence and improvising the dialogue as they went along. Romano’s brand of quirky, deadpan, observational humour is evident but it works as it fits Andy’s personality. It also keeps the story from getting maudlin, showing that even in difficult times, it’s still possible to laugh.

Duplass and Romano have great chemistry together and it’s hard to believe that the actors didn’t know each other until this project. Both men have said, though, that they have been long-time fans of each other’s work. Romano seems to be having a career renaissance of late, or perhaps it’s a second act, with the great reviews he received from THE BIG SICK. He’s also receiving praise for his role in Martin Scorsese’s latest film, THE IRISHMAN, which is currently playing in selected cinemas in the US and other markets. It will move to Netflix on November 27.

PADDLETON is one of those under-the-radar films that deserves to be seen. It’s available now on Netflix even in Hong Kong so do check it out.