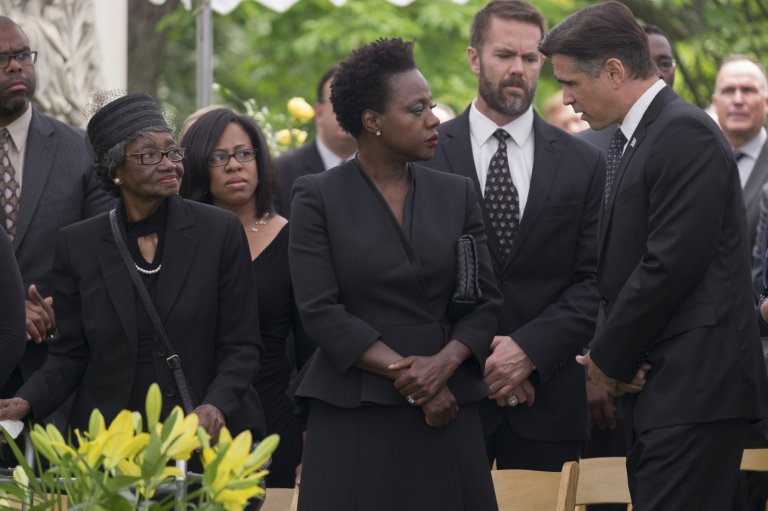 I hate it when I figure out a film’s “gotcha” way too soon. That’s what happened to me when I saw Oscar-winning director Steve McQueen’s (12 YEARS A SLAVE) latest film, WIDOWS. Even so, it still didn’t stop me from enjoying this racially-tinged, political/heist thriller. The film is everything that OCEAN’S 8 wasn’t but should have been. In other words, it was intelligent.

Veronica (Viola Davis, FENCES; THE HELP) and Harry Rawlings (Liam Neeson, SILENCE; SCHINDLER’S LIST) are living the good life but we learn very early on that surface appearances can be deceptive. Harry, it seems, is a career thief and he’s been very good at it over the years judging from the Rawlings’ upscale Chicago penthouse. But Harry’s luck runs out when his latest heist goes very wrong, leaving Veronica and the wives of Harry’s crew as widows. The women, who include Linda (Michelle Rodriguez, the FAST & FURIOUS franchise), Alice (Elizabeth Debicki, the GUARDIANS OF THE GALAXY franchise) and Amanda (Carrie Coon, THE POST), could have gone on with their lives except that Harry apparently had $2 million of Jamal Manning’s (Brian Tyree Henry, TV’s ATLANTA) money with him and the inner city crime boss wants it back. He even sends his hitman brother, Jatemme (Daniel Kaluuya, BLACK PANTHER; GET OUT; SICARIO), over to Veronica’s to let her know just how serious he is. Jamal, meanwhile, has other problems to deal with. He’s running for alderman in one of the city’s poorest districts against Jack Mulligan (Colin Farrell, THE BEGUILED; FANTASTIC BEASTS AND WHERE TO FIND THEM; THE LOBSTER; SAVING MR. BANKS), who is the son of Tom Mulligan (Robert Duvall, THE JUDGE; APOCALYPSE NOW!; THE GODFATHER), the man who has been that district’s alderman for 30 years and has profited quite handsomely in that time diverting government money his way. Neither Jack nor Tom intends to give up their power without a good fight. In this city of tough guys with big ambitions, Veronica shows that she can be just as tough and just as ambitious. When she finds the plans for Harry’s next heist, she calls the widows together to pull it off and get their lives back.

If the story sounds vaguely familiar, it’s because the screenplay (co-written by Gillian Flynn, GONE GIRL) is based on the British TV miniseries of the same name from the 1980s. Fans of that series say that this doesn’t compare but I haven’t seen it so I can’t comment. Regardless of whether it’s better or worse, WIDOWS features great performances from the all-star cast, and especially from Duvall, who, at 87, shows that age is just a number. But it’s the film’s two relative unknowns – Debicki and Cynthia Erivo, who plays Belle, the group’s driver, who are the real standouts. (Erivo will be seen again soon in BAD TIMES AT THE EL ROYALE.) To be fair, the film runs slightly on the slow side but McQueen manages to keep it interesting with smart camerawork and a few story twists. If you do get bored watching it though, you can always count how many times Farrell’s accent changes. I counted five. Let’s be honest here. His character was probably well educated. He didn’t need to sound like a two-bit gangster, which is how he sounds at the start of the film.

All in all though, WIDOWS is both a welcome change from the usual male-oriented films of this genre and a huge step up from OCEAN’S 8. Check it out and while you’re doing so, watch out for Lukas Haas. The little boy from WITNESS has grown up!

Watch the review recorded on Facebook Live on Thursday, December 6th at 8:30 am HK time!