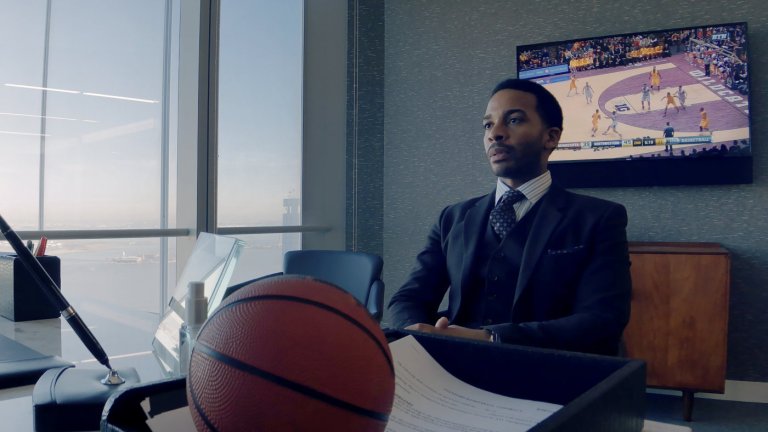 We’ve just had our first big typhoon of the year and, when they come, everything here in Hong Kong shuts down until the storm passes. Whenever the Observatory announces that the “Signal 8” will go up (we’re given at least two hours’ notice), everyone runs to their neighbourhood supermarket to stock up on supplies. For the locals, that usually means forests of toilet paper for a reason that I’ve never been able to understand. For the foreigners, it means sushi, snack foods and alcohol. Some people have their priorities in the right place! The return of typhoon season also means that it’s time to look at some films that you may not have heard of but should check out. The film this time is the latest by Steven Soderbergh (UNSANE; LOGAN LUCKY).

HIGH FLYING BIRD tells the story of sports agent Ray Burke (André Holland, MOONLIGHT; SELMA; TV’s THE KNICK), who has plenty on his plate to deal with as the film opens. Pro basketball is in its 25th week of a lockout and the owners don’t seem to be in any hurry to come to an agreement on TV revenue sharing with the players. Ray’s client, rookie player Erick Scott (Melvin Gregg), who also happens to be the league’s top draft pick, hasn’t been paid yet and that means that Ray hasn’t been paid either, which hasn’t gone down well with Ray’s boss, David Starr (Zachary Quinto, the new STAR TREK series, TV’s HEROES). Faced with pressure coming at him from all sides, Ray decides it’s time to disrupt both the game and the game that’s being played on top of the game. To do that, he pulls in a few people to help him, some knowingly and some unknowingly, including his able ex-assistant Sam (Zazie Beetz, DEADPOOL 2; and soon to be seen in JOKER), players’ association rep Myra (Sonja Sohn), owners’ rep David Seton (Kyle MacLachlan, TWIN PEAKS), and community basketball coach and old friend Spencer Jones (Bill Duke).

Like Ray is doing to the sports industry, Soderbergh is the disruptor of the film industry. His 1989 breakthrough film, the SEX, LIES, AND VIDEOTAPE, spawned a generation of independent filmmakers, and that indie spirit has continued up to today when last year he became the first major filmmaker to shoot a film (UNSANE) on a smartphone. HIGH FLYING BIRD is also shot on a smartphone, this time an iPhone 8 equipped with an anamorphic lens. The result gives the audience a fly-on-the-wall feeling as backroom deals are being discussed. My only complaint to the smartphone approach is that the lighting can be problematic at times. David Starr’s office and Erick’s apartment are both dark because of all the light that is flooding in from the large windows at both places.

The story is based on an idea by Holland and was turned into a screenplay by Oscar winner Tarell Alvin McCraney (MOONLIGHT). It’s very verbose with wonderful monologues, mostly delivered by Holland who savours every delicious word. The language so dense with imagery that you may find yourself watching the movie twice just so you can take it all in. (I know I did.) There is also a key reveal in the final scene that will have you looking something up on Google after the final credits roll. HIGH FLYING BIRD is about disruption in more ways than you’ll realise.

HIGH FLYING BIRD is available right now on Netflix (even in Hong Kong). Don’t wait for the next typhoon to watch it. It’s excellent.