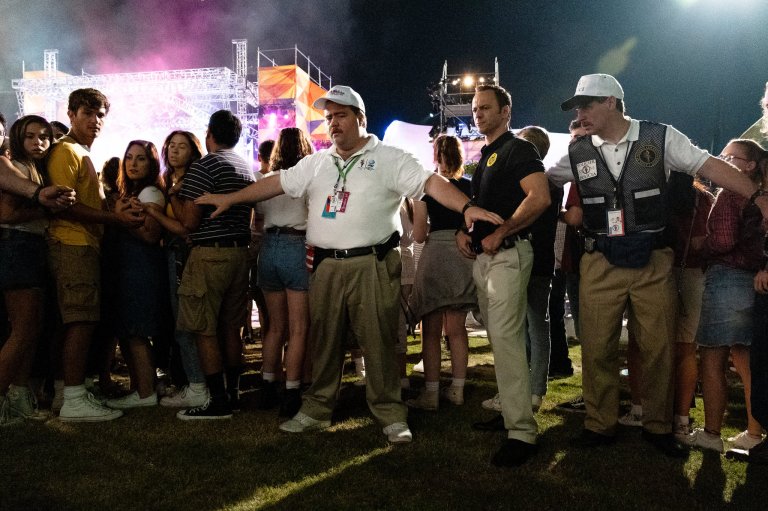 Eighty-nine year-old Hollywood legend Clint Eastwood (SULLY; AMERICAN SNIPER) is back with yet another hero story torn from the pages of recent American history books. This time around, his focus is on Richard Jewell, the security guard who discovered a bomb placed at the AT&T pavilion in Centennial Olympic Park during the 1996 Olympic Games in Atlanta, Georgia. Jewell’s diligence and commitment is credited with saving hundreds of lives but it wasn’t always that way. Thanks to the overzealousness of a reporter from The Atlanta Journal-Constitution and the FBI agents who were working on the case, Jewell was falsely accused by the media of planting the bomb himself.

RICHARD JEWELL introduces us to the morbidly overweight titular character (Paul Walter Hauser, I, TONYA; BLACKKKLANSMAN) ten years earlier when he was a hard-working supply clerk at the Small Business Administration in Atlanta. It was there where he met real estate lawyer Watson Bryant (Sam Rockwell, VICE; THREE BILLBOARDS OUTSIDE EBBING, MISSOURI), who was impressed with the young man’s eagerness to please. When Jewell’s contract ended at the SBA, he moved on to a series of jobs in law enforcement, but his over-exuberance never sat well with his superiors and he ultimately had to move back home with his mother Bobi (Kathy Bates, BOYCHOIR; MISERY) while he found new employment. When he landed the temporary gig at the Olympics, he hoped to parlay the experience into a job with the Atlanta police department and get his life back on track.

After the bombing on the night of July 26th, crime reporter Kathy Scruggs (Olivia Wilde, LIFE ITSELF; HER) was eager to get the scoop on who may have been the perpetrator. Through her contact with FBI agent Tom Shaw (Jon Hamm; BAD TIMES AT THE EL ROYALE; BEIRUT; BABY DRIVER; ABSOLUTELY FABULOUS: THE MOVIE; TV’s MAD MEN) – a composite character in the movie, she was able to learn that Jewell was the Bureau’s prime suspect, and both she and her editor rushed to let the world know. The news was quickly picked up by the likes of NBC and CNN (and others, though they are curiously not mentioned in the film), who proclaimed him guilty even before the FBI had formally charged Jewell with the crime. Of course, he wasn’t, but that didn’t matter. His and Bobi’s lives had been completely upended.

Eastwood is nothing if not a complicated filmmaker. There’s no question that he’s competent behind the camera. He always elicits great performances from his actors and he does so here too. The problem lies, of late, with his agenda and here it’s in plain sight. Yes, Kathy Scruggs and the AJC were rash in their zeal to pillory Jewell but there is no evidence whatsoever that the reporter used unsavoury techniques to pry the information about Jewell from the FBI agent. Unfortunately, Scruggs isn’t around to defend herself as she died in 2001. That hasn’t stopped the AJC from crying foul and their legal counsel has threatened Warner Bros. with a defamation lawsuit. The studio, however, has hit back saying that “the AJC’s claims are baseless and we will vigorously defend against them.” Meanwhile, the film’s screenwriter, Billy Ray (TERMINATOR: DARK FATE; GEMINI MAN), has said that he stands by “every word and assertion in the script.”

Regardless of how Scruggs learned about Jewell, had either she or the FBI done the tiniest bit of legwork in investigating the crime scene, they would have realised that Jewell couldn’t have been the bomber. Instead, they and others in the media and the FBI preferred to bully Jewell into submission because he was fat, overly chatty and lived with his mother. For Eastwood and other MAGA hat-wearing supporters of the current US president, this narrative just plays into their claims that honest, hard-working people like them are being manipulated by the fake news media and the Deep State. Oh, yawn. Hey, Clint! If you’re going to decry fake news, it would help if you didn’t make your own to press your point. In closing title cards, Eastwood conveniently neglects to mention all the people and organisations that Jewell rightly sued in the wake of this tragic incident.

Problematic as it is, RICHARD JEWELL is still entertaining cinema and worth seeing. Just don’t take this version of events as gospel.